On Monday August 25th, the shoreline of San Pedro Town near Banyan Bay Villas was dotted with a number of dead sea creatures that had washed ashore. Among the creatures were a spotted eagle ray, and several species of fish and eels. Hol Chan Marine Reserve Authorities and Marine Biologist Dr. Rachel Graham were called to the scene where they performed necropsies to try and determine the cause of death of these creatures.

Kirah Forman, Marine Biologist at Hol Chan Marine Reserve, along with Park Ranger Jairo Osorio and Director of Mar Alliance and The Belize Shark Project’s Dr. Rachel Graham investigated several factors. According to Graham, there are no evident signs on just what caused the occurrence. A necropsy conducted on the spotted eagle ray reported no signs of the creature being hooked, no apparent signs of trauma, hemorrhaging, or parasites in its internal organs. So just what is it that’s going on? Neither of the biologists could explain what is going on, but samples were taken for further testing. 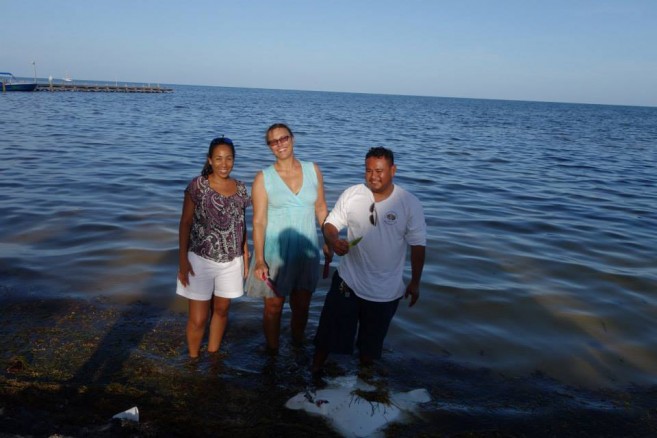 In the past weeks there have been large quantities of sargassum (seaweed) washing ashore on the island, Grahmam also states that there has been a rise in water temperatures, both of these may be contributing factors to the death of these creatures however in order for a conclusion to be drawn thorough water samples and tests must be conducted. The Hol Chan Marine Reserve and Dr. Graham are monitoring the situation. Boat motorists are, as always, advised to drive with caution.