A US national vacationing on Ambergris Caye faced five charges after she disrespected Woman Police Corporal Sharmane Young and also assaulted the female corporal while being detained. The US national is 43-year-old Lisa Marie Merz, a nurse from Syracuse, New York. The incident happened on Saturday, November 24th along the beach in the downtown area of San Pedro Town, after the police proceeded to search a man who was suspected of selling drugs to tourists.

According to police, sometime around 12:30AM, while on duty, Corporal Young’s attention was brought to a dark-skinned male who appeared to be selling drugs to some tourists. According to police, a female tourist was cursing at the man in a loud manner since he had offered her drugs. Police said that with the assistance of a special constable, they attempted to search the individual. It is reported by police that the female tourist was demanding that she witness the process. The tourist, later identified as Merz, was in the company of another male, 18-year-old Swiss national Jonathan Pacheles, who was trying to calm Merz down. Pacheles told police that while he only met Merz at a night club a few hours before, all he wanted was for her to calm down and as such took her away. But Merz returned and according to police, that’s when she began cursing at them on Barrier Reef Drive. Both Pacheles and the police said that Corporal Young asked her to discontinue her behavior and gave her the option to leave the area.

Police claimed that when she was warned, Merz swore at the Corporal again and that’s when she was informed that she was under arrest. While police proceeded to arrest Merz, she allegedly pushed Young with both of her hands. Merz is alleged to have uttered to Corporal Young, “$%*! You! Don’t tell me a mother $%*!” after which she proceeded to resist arrest by walking away. With the assistance of other police officers who responded to the area, Merz was restrained. While in custody, police said that Merz continued to utter very crude and offensive obscenities at Young, causing the officer to feel “very insulted and disrespected” especially since she is tasked directly with the responsibility of tourism safety on Ambergris Caye. In his statement to police, witness Pacheles explained that “Lisa’s behavior was uninvited and unprovoked and in my mind, as a tourist, it was disrespectful even after she was given the option to leave the area.”

As a result of her behavior, Merz was subsequently arrested and charged for using indecent words, using insulting words, boisterous behavior, assaulting a uniformed police officer and resisting lawful police arrest. But what should have been a normal arrest turned out to be even more than what had been expected. San Pedro police confirmed that the Minister of Tourism Manuel Heredia Jr. visited the Police Station to inquire about Merz after he apparently received complaints that the woman was treated unjustly. According to San Pedro police, Heredia was informed of the situation and was not happy when he was told that the female would have to be detained until Monday to appear before a Magistrate. 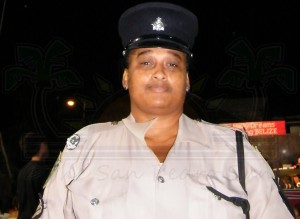 The San Pedro Sun also confirmed with San Pedro police that during the course of Saturday, the Commissioner of Police David Henderson instructed that Merz be granted bail and released. As such, Merz was granted police bail and was asked to appear before the San Pedro Magistrate Court on Tuesday, November 27th. When Merz appeared before Magistrate Sheraine Rodriguez in the San Pedro court, she pleaded guilty to four charges, and not guilty to the charge of “assaulting a uniformed police officer.” Because she pled guilty to four of the charges, Merz was also ordered to reappear in court on Thursday November 29th for a quick trial for the pending charge. She was found guilty of the charge of “assaulting a uniformed police officer”, and her charges are as follows: Assaulting a uniformed police officer – $800; Use of Indecent Words – $100; Use of Insulting Words – $100; Boisterous Behavior – $50 and Resisting Arrest – $300. All charges added up to a grand total of $1,350, which Merz was ordered to pay forthwith.

Coincidentally, Corporal Young, who was recently transferred to San Pedro as the Head of the Tourism Unit of the San Pedro Police Formation, was given an immediate transfer to Placencia. The transfer came into effect on Monday November 26th. No one has been found for her replacement on the island as yet, and it is uncertain if the transfer is as a result of Merz’s arrest, but Young was given no reason for her immediate transfer. We attempted to speak to Minister Heredia regarding the issue but all attempts were futile.