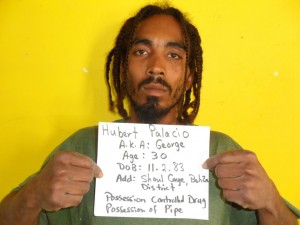 On Wednesday, January 15th, at about 4:20PM while Caye Caulker Police were conducting patrol on Avenida Mangle, Caye Caulker Village they stopped a male who was riding a bicycle on the street and informed him that a search would be conducted on him. At this point the person handed them a small bundle of green leafy substance suspected to be cannabis he had in his left hand and at the same time he threw an object which he had in his right hand which fell about 15 feet away from where they were standing. He was detained and escorted to the area the object fell. The object was retrieved and police suspected it to be a metal pipe used for smoking of Crack Cocaine. Further search on the person led to the discovery of five small pieces of white hard substance suspected to be crack cocaine inside the right front pocket of the pants. He was informed of the offence committed and taken to the Caye Caulker Police Station. He was later identified as Hubert Palacio, 30 years of age. The drugs were weighed which amounted to two grams of cannabis and 0.6 grams of crack cocaine. The metal pipe was measured which measured 3 ¾ inches in length. He was formally arrested and charged for two Counts of Possession of Controlled Drugs and Possession of Pipe.
Possession of Controlled Drugs
On Sunday, January 12th at about 4AM, while Caye Caulker Police was conducting patrol along the beach front, a search was conducted on a male which led to the discovery of a small transparent zip lock plastic bag which contained a white powdery substance suspected to be cocaine inside the left front pocket of his pants. As a result he was detained and escorted to the station along with the suspected drugs. The culprit was later identified as 30 year old Lindburg Williams. The suspected drugs was weighed which amounted to 0.9 grams. He was formally arrested and charged for the offence of “Possession of Controlled Drugs”. He was escorted to San Pedro Magistrate Court on Monday, January 13th.
Possession of Pipe 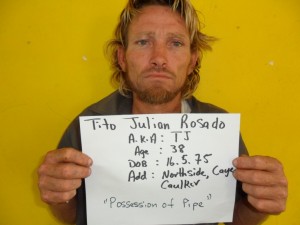 On Wednesday, January 15th at about 3:50AM, while Caye Caulker Police was conducting patrol on Avenida Langosta, Caye Caulker Village, a search was conducted on as male identified as Tito Rosado, 38 years of age. The search led to the discovery of a transparent glass pipe measuring 2 inches suspected to be used in the smoking of crack hidden inside the zip area of his pants. As a result he was detained and escorted to the station along with the pipe. He was formally arrested and charged for the offence of “Possession of Pipe”. He was escorted to San Pedro Magistrate Court on the same day.