Found Property
*On Wednesday, October 1st, as part of a special intelligence operation, the San Pedro Police, Quick Response Team, Criminal Investigation Branch and Special Branch personnel conducted a search on an abandoned building located in the Bayside Area. The search led to the discovery of five cases of Tecate beers, four case of Sol Beer and one case of Superior Beer, all contraband goods from Mexico. No one was found in the vicinity. The goods were labeled as “Found Property” and handed over to the Belize Customs Department. 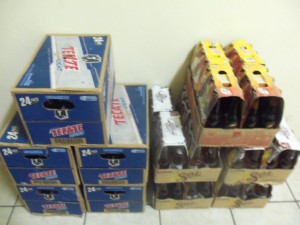 *On Thursday, October 2nd, San Pedro Police conducted a search in some bushes near a known drug dealer’s residence in the San Pedrito Area. The search led to the discovery of a black plastic bag containing 20 grams of suspected cannabis. No one was found in the area. The drugs were labeled and deposited as “Found Property”. 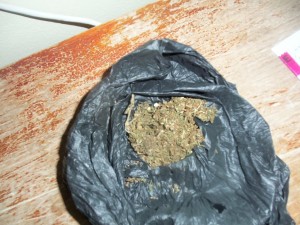 Possession of Controlled Drugs
*On Wednesday, October 1st, a search was conducted at the residence of 30-year-old Wayne Allen and 18-year-old Irma Mejia in DFC Area as part of special intelligence information. Present at the time of the search was 25-year-old Diego Wade, 24-year-old Martin Martinez and 19-year-old John Gillett. The search led to the discovery of 6.1 grams of suspected cannabis. All persons were informed of their offense and escorted to the San Pedro Police Station where they were formally arrested and charged for the crime of “Possession of Controlled Drugs”

*On Tuesday, October 7th at around 10AM a search was conducted at the residence of 29-year-old Ralph HILL, 26-year-old Deon FABER and 44-year-old Joseph DANIELS in the Boca Del Rio Area, San Pedro Town. A thorough search was conducted inside the premises which led to the discovery of a brown cigarette roll which contain 0.4 grams of suspected Cannabis. Subjects were formally arrest and charged for “Possession of a Controlled Drugs”.

Illegal Entry
On Thursday, October 2nd a search was conducted inside an apartment room in the DFC Area. The room was occupied by 23-year-old Salvadoran Blanca Estell De Lopez. De Lopez was asked to show proper travelling documentation but was unable to do so. De Lopez was handed to the Belize Immigration Department for further investigations.

Drug Trafficking
On Tuesday, October 7th at around 8:30Am, acting on Special Branch intelligence, a team of San Pedro Police, Quick Response Team, Criminal Investigation Branch and Special Branch personnel conducted a searched at an apartment room located on Sandpiper Street in the San Juan Area, San Pedro Town. Present at the time of the search was 55-year-old Rene Gabriel PEREZ and 18-year-old Nairo PEREZ. A search was conducted inside the room which led to the discovery of a small pink plastic container which when opened contained green leafy vegetable substance wrapped in transparent plastic wrap. The substance amounted to a total of 123 grams of suspected Cannabis. Also found inside the plastic container was $656BZ in different denominations believed to be proceeds from drug sales. Subjects were formally arrested and charged for “Drug Trafficking” and are awaiting arraignment in Court.