The Belize Police Department has released the crime statistics for the first quarter of the year. The statistics show all major crimes committed across the six districts in Belize from the months of January to April 2015. According to the results, major crimes which include murder, rape, robbery, burglary, theft and carnal knowledge have seen a 10.8% decrease in 2015 as compared to the numbers of 2014. 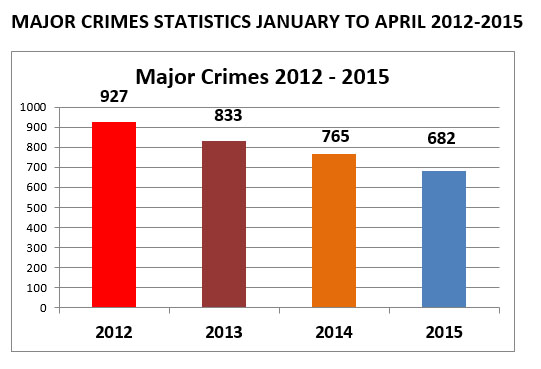 While the statistics report a decrease in major crime for the first quarter, 2015 has seen the highest murder rate from January to April in the past four years. As of Wednesday, May 13th there have been 46 murders registered across the country. San Pedro Town alone has seen seven murders so far this year. This marks a 28% increase in murders when compared to the first four months of 2014 which only registered 33. Rape incidents also registered a slight increase. 12 cases of rape where reported in the first quarter of 2014 while 13 case have been reported in 2015.

Besides the increase in murder and rape, the statistics show a decrease in all other major crimes. Robbery and burglary incidents saw a decrease of 30% and 29%, respectively, theft has a slighter decrease of 2% (all compared to 2014 quarterly statistics). A 19% decrease was registered in Carnal Knowledge incidents in the first four months of 2015 as compared to the first quarter of 2014.
In San Pedro there was a spike in crime in the first months of the year, but after several initiatives by the San Pedro Police Department the crime situation seems to have regulated. This initiative included increased patrol in all areas of town, increased personal and house searches, as well as the implementation of community policing efforts.