The San Pedro Police detachment held a business watch meeting on Wednesday, August 26th at the Lions Den, where an update was given on the comparative statistics for the period of January to August 20th for 2014/2015. Various members of the business community were invited to participate and learn about the progress the police department is making in San Pedro. The meeting highlighted recent activities on the island, as well the plans put in action by the security forces. 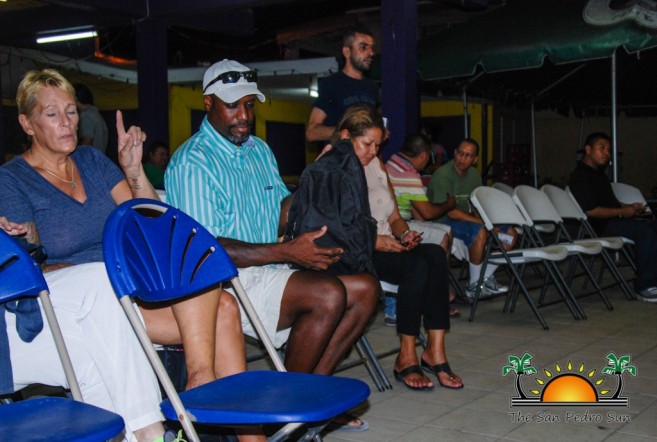 Superintendent Sandra Bodden opened the meeting, briefly introducing herself and started her report. “I hope to meet many more of you who are here in attendance and of course to work closely with everyone. Since taking over last month, we’ve had an increase in our major crimes. In the case of burglary we’ve had an increase by one and theft has increased by two compared to the same time last year,” stated Bodden. She indicated that burglaries have been occurring mainly on the weekends. “In the area of theft, most of the incidents have been occurring in zone 2, which is by Boca del Rio, and downtown and San Pedrito areas. We have been patrolling these areas in an attempt to avoid any incidents to escalate,” said Bodden. She commented that there are 54 police personnel who are engaged in a 12 hour shift with appropriate time off.

Deputy Officer in Charge Henry Jemmott explained the different strategies being implemented by the police force in San Pedro. “In comparison to major crime, last year we had 262 and so far, up to this time in comparison to last year, we have 191 which shows a 27% decrease of crime in San Pedro. We have increased the patrols in the San Pedrito, San Juan, DFC, Boca del Rio and San Mateo, and due to these initiatives, crime has been reduced so far. This plan has also been successful because of the community assisting the police. We cannot do it ourselves, so the way forward is community-police,” stated Jemmott. He encouraged everyone who may have queries or any issues to feel free to visit the police station.
Hector Cocom from the Belize Police Department IT Unit also took some minutes to speak about the benefit of security cameras, urging business operators to have them at key areas of their establishments. “One of the reasons crime can be avoid is by the installation of surveillance cameras. This will keep potential culprits away. Also, I want to make something clear since a few persons have been misinformed. My unit has a cybercrime section who deals specifically with the extraction of data from the cameras. So this means that when there is an incident, you will not be required to present evidences in court. A person from my unit will extract the data from the camera and he will be one who will present the information to the court,” explained Cocom. He indicated that is important to select the type of cameras that best suits the needs of the establishment. There are systems designed for the viewing of people walking up and down, merchandise, or faces. Cocom indicated that “faces” are very important for the police when investigating a case.

Bodden encouraged everyone to make the investment and install cameras in their respective locations for their personal safety along with their patrons and anyone who frequents the respective establishments. This was one of many meetings planned to aid in improving community-police relations.
The San Pedro Police would like to thank everyone who attended the meeting, and they look forward to continue working together with the entire community, making San Pedro a safer island for everybody.