A week after the brutal murder of Honduran national Johana Samantha Mendez Barrios, the San Pedro Police Department continue their investigation in solving the crime. Barrios was killed inside her apartment by a single slash to her throat in the early hours of Tuesday, February 16th at the Boca Del Rio area. Since then, police have apprehended two suspects. 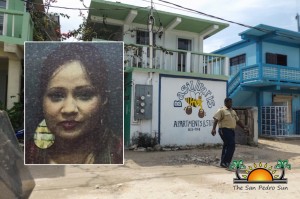 According to Deputy Coastal Executive Assistant Superintendent, Henry Jemmott investigations regarding Barrios’ case have made significant progress. “We have detained two persons, for whom we’ve sent up fingerprint samples and different aspects to try and find out who committed this crime. We haven’t had the cooperation of the public to a certain extent in solving this crime and it is very alarming, because these rooms are very close to one another, and people are refusing to come forward and give us the statements that we need to actually put together a proper case in this matter,” said Jemmott.
From the reviewing of camera footage from nearby buildings, it appears that someone was waiting for Barrios. The footage reveals that the culprit left the area shortly after committing the heinous crime.
Police will continue their investigations until the case is solved, and once again ask for public cooperation in this matter.