« Older: Central Park: Are the renovations completed?
Newer: » Mayor Paz reflects on the accomplishments of the SPTC 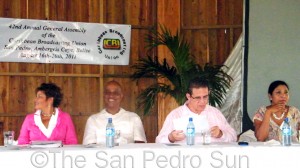 The Caribbean Broadcasting Union (CBU), formed in 1970 with a vision of stimulating the flow of broadcast material among the Radio and Television systems in the Caribbean region, held opening ceremonies for its 42nd Annual General Meeting on Wednesday August 17th at 9:30am at the conference room at Coco Beach on Ambergris Caye.

CBU reaches over 4.8 million people in the Caribbean and millions of others extra-regionally. As a regional institution, it facilitates discussion and analysis that assist in policy formulation on major integration issues.

Media personnel from across the Caribbean gathered at Coco Beach here on Ambergris Caye for the three day General Assembly and one fun day schedule. Master of Ceremonies for the event was Mr. Patrick Cazier, Secretary General for CBU, while Great Belize Television’s CEO Ms. Amalia Mai administered the welcome address.

This was followed by a very informative address by President of CBU, Mr. Vic Fernandez, during which he stressed on the ignorance of CARICOM (Caribbean Community) leaders as it pertains to the many accomplishments of CBU, as well as their lack of financial assistance to the CBU from heads of Governments of CARICOM. He also spoke on the importance of maintaining politics and journalism separate, while touching on responsible journalism – the importance of facts as oppose to opinion.

This was followed by Keynote Address by Hon Dean Barrow, Prime Minister of Belize, who offered to be the messenger in relaying the message from the CBU to leaders of CARICOM states. As the ceremony continued, two individuals were newly inducted into the CBU Hall of Fame. This induction recognizes extraordinary contribution and a consistency of excellence. Recipients Mr. J. A. Lester Spaulding of RJR Communications Group in Jamaica and Stewart Krohn, over 35 years of service in Belize, extensive work as a pioneer of Belizean programs. Presenting the citations was Honorable Prime Minister, Dean Barrow.

The CBU actively organizes training programs for management, programming, marketing and engineering personnel. Over the following days, the members of the Assembly will participate in presentations and discussions on Digital Transitioning in the Caribbean as well as other issues affecting the CBU.