The People’s United Party (PUP) leadership is still uncertain and, as of press time (5:00PM Wednesday October 19, 2011), applications for the post were received from Arthur Saldivar, Julius Espat and Michael Espat. The PUP leadership crisis started with the resignation of the former Party Leader and Orange Walk Central Area Representative, Hon. John Briceño on Friday October 7th, 2011. Briceño also wrote to the Governor General of Belize, His Excellency Sir Colville Young, informing him that he is also stepping down as Leader of the Opposition in the National Assembly. 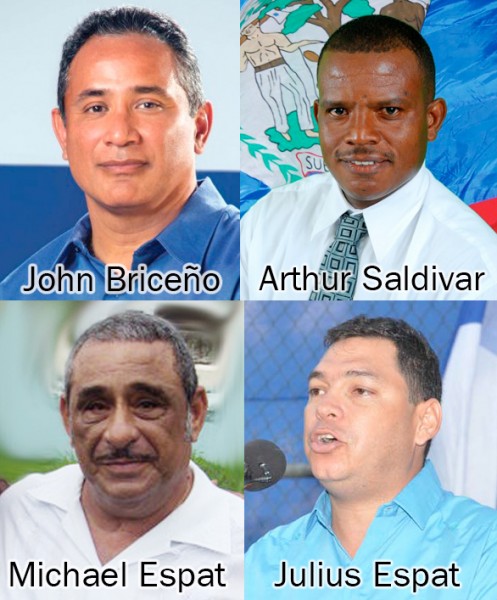 In his statement given almost two weeks ago, Briceño said, “Today (7th October 2011) at the National Executive meeting I announced my resignation as Party Leader of the People’s United Party. Consequent to my announcement, the National Executive decided that the Hon. Mark Espat serves as acting Party Leader in the interim.
Over the past few months, I have been battling with my health issues and it will require me having periodic visits abroad for treatment.”

The news of Briceño’s resignation just 15 months short of two major elections sent shock waves to the PUP supporters and even the Prime Minister Dean Barrow. Moments after Briceño stepped down as PUP Leader, PM Barrow told the media that he thanked Briceño for his service to the Nation as Leader of the Opposition and wished him the best.
And with Briceño’s abrupt exit, Albert’s Area Representative was named Interim Leader until the election of a new Party Leader. This led to an urgent meeting of the National Executive who then set 5:00 PM on Wednesday October 19th as the deadline for nomination of the vacant post. Despite a 30 out of 31 Division endorsement given to Espat, he declined to take up the position as Party Leader.

In a statement given to the press, Espat indicated that his decision was final. The statement reads, “Today, I informed members of the National Executive and the Standard Bearers of the People’s United Party of my final decision not to seek the post of Party Leader. I am profoundly grateful for the numerous expressions of support for my leadership from Standard Bearers, Party branches, Party members and from the general citizenry of Belize.”
Over the past two weeks, Espat was not able to secure financing for a multi-million dollar plan for the Party’s operations. Espat had indicated to the PUP National Executive that the only way he would lead the PUP is if the Party had a clear indication as to where the party funds to pay BZD$5 million dollars party debt and additional $8 to $10 million for the next two elections would come from. Those conditions were not ironed out and so Espat humbly declined the offer.

In declining, Espat left the way open for Arthur Saldivar, and almost 30 minutes before deadline, Julius Espat and Michael Espat. The 2013 General Election will be Saldivar’s and Julius Espat’s first shot in a nationally contested election.

In a letter sent to PUP Secretariat by the Order of Distinguished Services (ODS), which vets candidates before they run for the Party, the ODS states, “it is shocking to hear that Arthur Saldivar wants to vie for the position, as he has yet to prove that he is the leader of Belize Rural North, much less the country of Belize.” It went on to say that, “We ask that he (Saldivar) be humble enough to step aside and [wait] his turn, if and when it comes.”
Because of the last-minute timing of the Espat candidates (no relation to each other), there is no word yet from the ODS regarding their candidacy.