Since launching her candidacy in July of 2011, Independent Mayoral Candidate of San Pedro Town Melanie Paz has been holding meetings across the island. One such meeting was held on Monday night, December 19th, with the business stakeholders on Ambergris Caye. The meeting took place at Fido’s and had the attendance of several business people from all over the island.

In speaking to the gathering Paz gave an introduction on her involvement in the community over the past 27 years and her track record of accomplishments as a leader. She spoke on a number of issues ranging from the apparent lack of accountability and transparency in conducting Town Council’s business by previous and current administrations as well as crime, education, finance and restoring public confidence in the work of the council.

On the issue of restoring public confidence, Paz said, “we need knowledgeable people to lead the various committees. We cannot be putting people who have no clue of running the different committees. This will have to stop regardless of who gets elected as part of the council along with me.” Paz said that her commitment is not to any particular political party, but to the people of San Pedro. And as such, her priority will be that of the people. 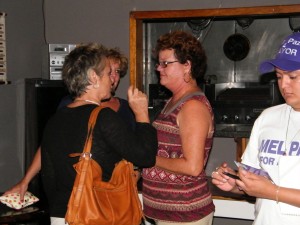 Those in attendance asked Paz to address the way she would approach the concerns relating to the apparent lack of transparency, poor accountability standards, unreported spending of finances and lack of public meetings and consultations. “Addressing the issue will not take one or three years, it will take many more years but we have to start from somewhere. The issues raised have been happening for too long and we will never see progress if we don’t fix the problem. The first thing I will do upon taking office will be to conduct an independent and complete audit at the Council. I will have nothing to hide so I will make the report public in the media and in a public meeting regardless of the results. People will be informed about the situation and how we intend to move forward. Believe me that will be a headache. But we have to start from somewhere if we want to rescue our island,” responded Paz. She explained that Town Council meetings will be made public and quarterly reports will be published in the media and made available in print to any member of the public at anytime as mandated in the Town Council Act.

In order to establish public confidence and integrity at the Council, Paz explained that she will work very closely with the private sector. “I will have to depend on the support of the private sector, their expertise and close advisors as how to approach this problem. Certainly people who are capable and knowledgeable will be sought for assistance,” explained Paz.
One of the burning issues that dominated the meeting was that of security and crime on the island. “We cannot expect the police to do all the work for the large population we live in. We will certainly have to meet with them and see how we can be of assistance. The neighborhood watch program is working excellent and we will work very closely with them to strengthen the groups in some of the areas; the council will become involved with the neighborhood watch groups and make a plan as to how we can work together to make the workload of the police a little easier,” responded Paz.

Paz said she is capitalizing on her record of honesty and that of an unconditional servant of the people explaining that she plays no politics, makes no promises other than a commitment to work for a better San Pedro.

Editorial – “What sort of voter are you?”