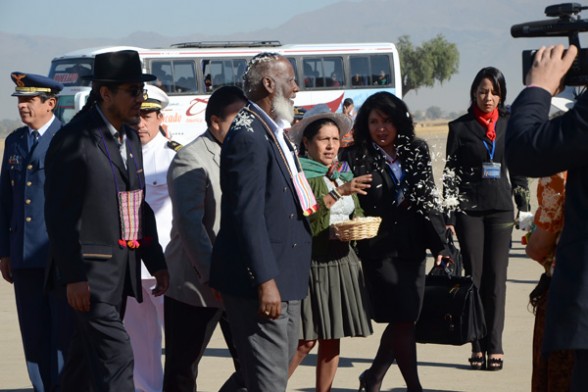 Belize, Haiti and Panama representatives to the OAS at Cochabamba City, Bolivia. Photo by José Rocha of LosTiempos.com

Belmopan, 6th June, 2012. Belize is being represented at the 42nd Regular Session of the General Assembly of the Organization of American States (OAS) being held in Cochabamba, Bolivia by a delegation led by the Hon. Wilfred Elrington, Attorney General and Minister of Foreign Affairs of Belize.

The 42nd Session, which got underway on Sunday, June 3, ends today, June 5, 2012. It was convened under the theme “Food Security with Sovereignty in the Americas.” During the inaugural session on Sunday, President Evo Morales of Bolivia proposed a profound analysis and restructuring of the OAS to make it more responsive to the realities of today and to the demands of its member states.

In the framework of the OAS General Assembly, the Belize delegation also met with the Secretary General of the OAS, H.E. José Miguel Insulza, the British Secretary for South America, and with the Foreign Minister of Guatemala, among others.

The OAS General Assembly is the highest decision making body of the OAS and it meets once a year.