« Older: Decriminalization of Marijuana in Belize being discussed
Newer: » Letter to the Editor: The word on the street is that government is paying gang members 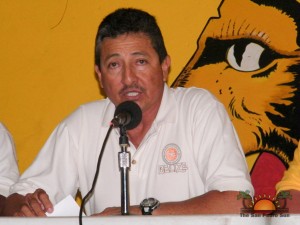 On Thursday, July 26th Mayor of San Pedro Town, Daniel “Danny” Guerrero presented his first official public report to the resident of Ambergris Caye. The public meeting called by Mayor Guerrero, was to report to the islanders on the financial status of the council upon taking office. Members of the council also took the opportunity to highlight some of the work being done since taking office as well as to report on some of the projects they are working on.

According to Mayor Guerrero, after  taking office the council decided to embarked on assessing the council and report on the findings . The report on the financial affairs was conducted by council employees and was not an independent report as promised by Guerrero during a Mayoral Candidate’s debate held on January 18th.

“I don’t want to get into the witch-hunting. I believe that what has happened in the past is of the past,” said Mayor Guerrero when asked if any irregularities were noted and if any action will be taken against the past town council. He elaborated by stating,  “For us to really focus on working and producing for the community we don’t want to focus on the past…  I don’t really want to go to the past. I know the media wants to know and that’s good. When people ask for a report and you look around at the empty chairs you want to know where the people are that were crying for a financial report.  But not because they are not here we will not do one, I can guarantee the residents that under our term, we will be audited for our term in office by the Auditor General’s Office.  I am not interested in what was done under the previous administration because whatever happened is gone and we cannot do anything. But to be honest with you I still applaud the ex-mayor Elsa Paz, my cousin, for a great job because she did a very, very good job for San Pedro.”

Mayor Guerrero’s in-house audit report is the first to be conducted and give a synopsis of the council’s financials since 2006.

In his report Mayor Guerrero first outlined what was in the bank when he took office on March 9th.

Balance at the Banks and on hand are as follows:

According to the Mayor’s report miscellaneous expenses included $92,452.13 for the rehabilitation of Laguna Drive and $23,014.82 owed to Belize Water Services for the San Mateo Water System.

Mayor Guerrero also listed three loans that are under the name of the San Pedro Town Council (SPTC). One of the loans, in which it is not mentioned by name who the loaning institution is, is owed for the purchase of 500 acres of swamp land in the Caribbean Coves Area signed in 1998 for which the council owes $3,572. The second loan is $1,378,524.17 obtained from the Government of Belize for the rehabilitation of Laguna Drive. According to Guerrero, the SPTC is repaying $31,000 monthly through the funds collected at the bridge. There is a third loan from Atlantic Bank, which for the first time is being confirmed to the media, of $832,470.34. The loan was obtained for the rehabilitation of Angel Coral Street. Repayments of the loan are being made  by Grand Belizean Estates through an existing commitment to contribute $4,000 for ever lot sold at their development in north of San Pedro. As was reported previously by other news publications, Grand Belizean Estates took over the loan when the previous SPTC was unable to meet its bank loan payments. No mention was made as to what was used as collateral for the three loans. Also listed in the Mayor’s report were uncollected revenues such as property taxes amounting to $347,789.28, trade tax of $38,457.74 and garbage fee of $12,785 all totaling $399,032.02.

The Mayor did not list the assets belong to the council on the night of the meeting but did provide the SP Sun with a copy of assets received upon taking office. For the most part the report lists regular office equipments heavy machinery, vehicles utilized by the council for the up keep of the town, cycles used for the transport department and golf carts used by councilors and the Mayor. One item of question was the lack of reference to the private vehicle owned by former Mayor Elsa Paz. In an interview with the past mayor on December 8, 2011, Elsa Paz told The San Pedro Sun that she had sold the vehicle to the Town Council for the same price she had acquired it for two-years previously. According to an accountant at one of the banks in San Pedro Town, The Sun was told that in any financial report such as the Council’s it is customary for all assets listed to reflect a dollar value. In addition, the accountant explained that all properties, including buildings and land under the name of the SPTC should be listed under assets with a value. If any assets are used as collateral they should be reflected in such a report as well. In its list of assets, the SPTC did not mention if they indeed owned any buildings or land as part of the council’s assets, nor does the report account for the  value of such  assets owned, making it  difficult to reach an estimated figure in assets. Additionally the report does not indicate if any assets have been used as collateral for the three council loans.

The financials of the council became a major issue during the election campaign last March and on countless occasions candidates questioned the practices and decisions taken by the previous council in running the affairs of the town. What even compounded the issue was that during former Mayor Elsa Paz’s term, only once was the council audited by the Auditor General’s Office which reflected most of her predecessor Mayor Alberto Nuñez’s term in office.

While the report leaves many unanswered questions, the current council hopes the community will leave the questions behind and move forward in unity. “Let unite and move San Pedro forward. If we are going to fight over finances then we will create a division and nothing will be done to move this island forward. I believe in moving forward. This my home and the home of all islanders so let us unite for San Pedro, we have no time to waste on the past,” said Mayor Guerrero speaking in Spanish during the public meeting.

Although the purpose of the public meeting was to present what was inherited from the previous council, the councilors also took the opportunity to share what has been accomplished so far under their five months in office, which have been many. The SPTC also informed that they will be presenting their first quarterly report in the near future, but no date has been announced.

Questions from the public for Mayoral candidates in San Pedro town