The Prime Minister of Belize Dean Barrow is back in the country after attending a meeting of Heads of State of the Central American Integrated System (SICA) of which US President Barrack Obama was a guest. The SICA meeting took place in Costa Rica on May 3rd and 4th and the highlight of the meeting was a meeting of the regional SICA Heads of State with President Obama where issues related to the regional economy, drugs and security were discussed.

The SICA meeting was planned to coincide with Obama’s visit to Costa Rica on the invitation of President Laura Chinchilla. According to official media releases from Costa Rica all Heads of State of Central America including Nicaraguan President Daniel Ortega, an open critic of Obama, was present. The Central American leaders, in speaking to President Obama highlighted that if there is not increased cooperation on behalf of the main consumer of the drug (United States), the fight against drug trafficking and organized crime will not be enough. , said Salvadoran President Mauricio Funes.

In its last report, The United Nations’ International Narcotics Control Board estimated that more than 70 percent of the 280 tons of cocaine flowing from South America to the US passes through Central America. President Ortega, said that given the figures from the region, that the United States is the largest recipient of drugs in the world, they must assume greater responsibility with governments of the region to help curb drug trafficking. For his part Guatemalan President Otto Perez Molina, in his comments move away from a regional fight against drugs and was more incline in pushing forward to legalize certain drugs as an alternative way of fighting illicit use of drugs. President Molina is quoted in the media as saying that Obama was not willing to consider a policy change, but that the “dialogue remains open, and we’ll keep working at it.” 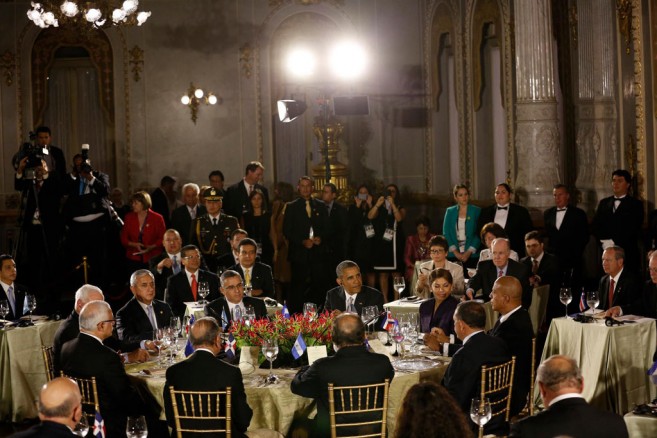 In his remarks President Obama said that “Our meeting with the leaders of Central American and the Dominican Republic is a sign of the importance that the United States places on this region, as well as our commitment to being a steady and strong reliable partner, because we believe that no matter where you live, the people of this region deserve security and opportunity and dignity.”
The SICA leaders also discussed U.S. immigration reform and the economic impact on Central American. It is estimated that over 5 million Central Americans live in the US of which their families in the seven nations depend on remittances to survive. In 2012 alone, remittances from the U.S. to Central America is estimated to have total some US $12 billion; equivalent of 7% of the region’s gross domestic product. President Obama in addressing the issue explained that that immigration reform would “pave the way for millions of undocumented immigrants to receive citizenship” thus avoiding becoming “victims of abuse and exploitation.”
The leaders also asked President Obama to provide cheaper oil for the region. Both Honduran President Porfirio Lobo Sosa and Salvadorian President Mauricio Funes pointed out to Obama that high US oil prices is hurting the regional economy since high oil prices means that the cost of goods and services in the Central American countries is higher. The also brought up the issues of facilitating trade and creating favorable business and investment climates as well as the US support for economic growth and development in Central America.
In a release from The White House following Obama’s visit with Central American leaders indicated that US continues to support the region’s economic growth and social inclusion efforts through multiple, complementary programs that contribute to: building strong, capable and transparent institutions; facilitating trade and creating favorable business and investment climates; expanding access to reliable, clean, and affordable energy; and investing in human capital so that citizens are prepared to contribute to the development of their communities. “For 2012, the United States committed $437 million to Central America to support nutrition, health, education, agriculture, women’s entrepreneurship, the protection of workers’ rights, the elimination of child labor, construction of transportation infrastructure, and creation of transparent government initiatives. The Overseas Private Investment Corporation (OPIC) and the Export Import Bank (EXIM) committed $330 million in financing and insurance that mobilized $100 million in private sector capital enabling new investments in microfinance, and expanded credit for the use of U.S. goods and services in the development of infrastructure, transport and other needs,” states the release.
The regional leaders as well as President Obama concluded their working visit to Costa Rica with a meeting with business leaders of Costa Rica on Saturday evening. Also present at the SICA meeting with the US President was the President of Panama Ricardo Martinelli, Prime Minster of Belize Dean Barrow and the President of the Dominican Republic Danilo Medina. There was no announcement by the Government of Belize Press Office or the Office of the Prime Minister of PM’s Barrow leaving the country to Costa Rica on official visit.