The San Pedro Town Council (SPTC) announced on Tuesday June 4th that they are acquiring a prime property in the down town area for the municipality. It was the major of several other announcements made by Mayor Daniel Guerrero when he appeared on the local morning show. Also announced was the continuation of the paving of streets in the Eliot Subdivision (also referred to as the Back-a-town area) as well as other main streets used throughout town. 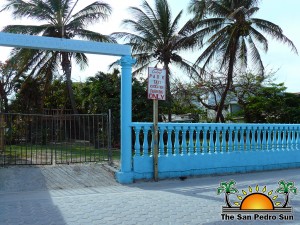 “The SPTC has set up a steering committee that will look at acquiring a number of properties. Our town grew without a proper plan and so we have to start acquiring property for the use of the municipality,” explained Guerrero. The first property that the council, along with the Area Representative Manuel Heredia Jr. will work to acquire is that of the late George Parham (Sands Hotel). “We are starting the process to try and acquire the property directly west of the Central Park. We think that it can be used for municipal parking and the building can be used for government offices,” explained Guerrero. That property is on sale for BZ$4 million, and according to Guerrero, they hope to convince the Government of Belize to assist them in acquiring it. “Nothing is final as yet, but we are lacking in town space. We are looking at a few other properties, and with the help of the steering committee in place, we hope to be able to approach donors to assist us in acquiring it,” said Guerrero.

At the same time, the Mayor said that the council continues on its street pavement project in the short term. “The councilors and I have decided that we must continue with our street project. We believe that it will continue to enhance the community and improve the quality of life of our islanders,” said Guerrero. 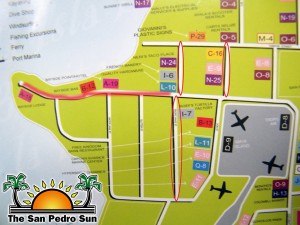 One of the first streets in this phase is Manta Ray Street; this street runs in front of the Dr. Otto Rodriguez San Pedro PolyClinic II. Other streets that will follow will be San Piper Street from the San Juan Statue to the beach. In the Eliot Subdivision (Back-A-Town), streets that will be paved are Trigger Fish Street, Chicken Street, Tropical Wave Street and the remaining portion of Swan Street from the corner of Lions Street to the lagoon. Sea Grape Drive and other streets in the DFC, San Pedrito and San Juan areas will also see some upgrade as the council is barging in hardcore to fix areas that are flood prone. “The monies for this project are coming through the collection of municipal tax,” explained Guerrero who took the opportunity to advise residents and businesses to come in and pay their taxes.

The Mayor also announced that after being closed for a little over two weeks, the Sir Barry Bowen Bridge will be reopening before the weekend. The bridge is scheduled to be open as of Friday June 7th, the general public is asked to please be mindful when crossing the bridge as work will still be ongoing.