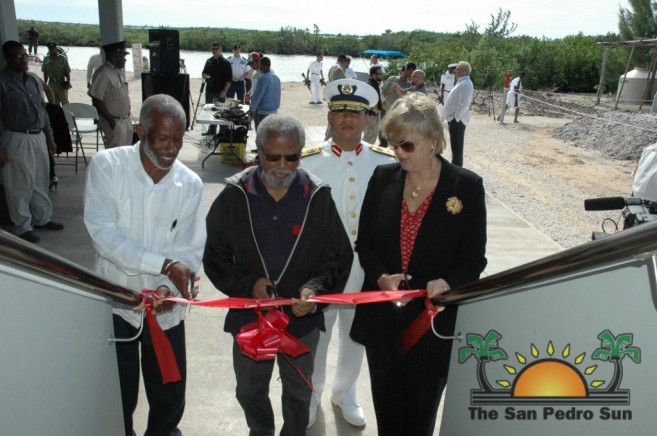 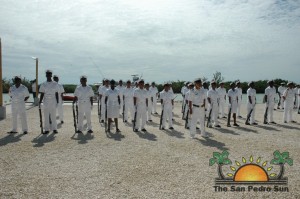 According to Chief Executive Officer in Belize’s Ministry of National Security Lieutenant Cornel (Retired) George Lovell, since its establishment on November 28, 2005 said that the Belize Coast Guard has accomplished yet another milestone as it moves its mid-term goals. Lovell explained that having over 14,000 square miles of waters to patrol, the Belize Coast Guard can boast that they have Belize’s water under control. “The Coast service is an essential element of our national security. The protection of Belize’s maritime spaces and commerce from threats, both foreign and domestic, through the provision of maritime security, safety and protection of our people, industries and natural resources has been, and continues to be, the Belize Coast Guard’s main goals.”

As part of their mid and long term goals, the Belize Coast Guard has a plan to increase their manpower up to 40 annually through the year 2020. On Friday, 30 new Coast Guard Officials graduated as part of their 4th intake. From the 80 that started a vigorous 12 weeks strenuous mental and physical training, only 2 female and 28 male succeeded. 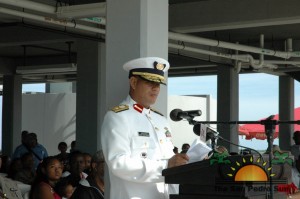 Commandant of the Belize Coast Guard, Rear Admiral John Borland said that the graduates that survived the training are the best. “We had a target to graduate 40 recruits annually. The training is not for anyone because it is terribly hard and the transition from a raw civilian to become a military person that absorbs the military routine is rough. You have to transform your physical body, your mental state, so it really takes a toll on one’s body. Most people are out before the first week of the training. By the end of the third week of training, it gives us a clear indication as to who will survive the military training, but we do our best to retain our recruits. It is a very strict and rigid selection process…. As it relates to female to male recruits, yes it is disproportionate. Even if we should go by the policy for recruits in the military, females make up 15% of the military. We would not have the amount of females we want. We certainly welcome women in the Coast Guard. At one point, we had three in the squad but in the third week of the training we fell to two. However, we have a female officer waiting to be promoted to Commission Officer she is Kaina Martinez, who represented Belize in the last Olympics.” 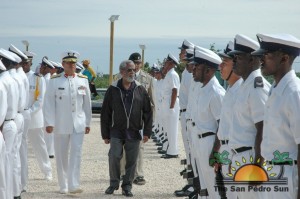 At the event, Governor General of Belize His Excellency Sir Colville Young inaugurated the Belize Coast Guard’s second facility located at the entrance of the marina channel on the southwestern part of the island across the lagoon. Lovell said the idea of building a facility on Ambergris Caye came in 2008, and he explained that because the island is one of the major points in Belize for the transshipment of drugs that finds its way to the US, the idea was not dismissed. Providing the infrastructure and equipping law enforcement personnel is paramount for both Belize and the US to fight the trans-national crimes such as narco-traficking and human trafficking.

The new base called the Northern Forward Operational Base (FOB) was financed by US Government through the US Southern Command to a tune of US$1.5 million. It includes a command center with state-of-the-art equipment and tracking devices, accommodation space for 16 personnel, a diesel generator and fuel station that can hold 5,000 gallons of diesel and gasoline, a docking facility for up to two large vessels, and the structure can withstand Category 5 hurricane force winds. 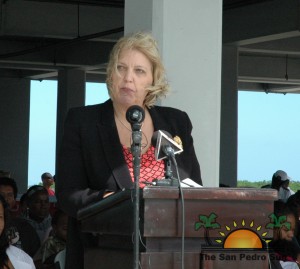 Margaret Hawthorne, US Deputy Chief of Mission in Belize spoke of the benefits Belize is seeing from collaborating with the US Government in the fight against common problems affecting the two nations. “This Forward Operational Base (FOB) represents the culmination of years of team work and collaboration between the Belize Coast Guard, The Government of Belize and the US Southern Command. The FOB will provide a security presence in the transit zone for narcotic trafficking and provide maritime safety, search and rescue, law enforcement and environmental protection capabilities in Belize’s most northeasterly sovereign territory. Furthermore it places the Belize Coast Guard well on track to completing its overall development plan of three operational zones, four major forward operating bases and ten 47-foot Boston Whaler 370 outrigged Justice Service boats complimented with training and specialized equipment.”

CEO Lovell said that FOB capability extends far beyon San Pedro Town. It will serve as a base that will stand ready 24 hours a day to deploy vessels and personnel to the Belize-Mexico Border along the Rio Hondo River, the Chetumal-Corozal Bay, and the northern cayes including Caye Caulker and Ambergris Caye and extending to Belize’s high maritime waters. Lovell said that the base will serve many purposes and has many missions. “Their mission will range from drug trafficking, human trafficking, illegal contraband, fisheries and environmental protection and safety and disaster relief operation. The new intakes will be assigned to various areas including Ambergris Caye. They will be required to perform in a manner where military training and law enforcement duties will be expected with high degree in society, without aggravating or causing a particular situation to escalate,” said Lovell. 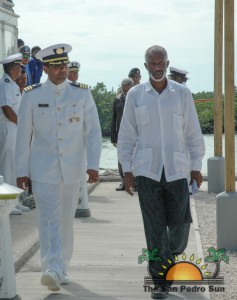 Borland was asked to comment on public opinion that Belize’s military is being Americanized. “I wouldn’t say we are being Americanized, but our doctrines have to start somewhere and develop some direction. Most of the military units in the world are based on 18th century German doctrines. What is happening between the American and Belizean military is that we share common goals and common threats as it relates to drugs and other challenges, and so we are in the fight together. The Americans are our biggest allies, no doubt about that, and there is no way the Belizean military would be able to continue to grow at the pace we are growing. Like I said, the threats are mutual and there is no intention from the US to Americanize our military.”