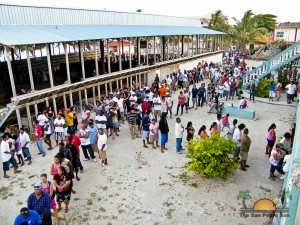 On Wednesday, November 4th, registered voters will be heading to the polls to cast their votes in an early General Elections. With only days remaining, The San Pedro Sun has detailed the rules and regulations involved when exercising your right to vote. The Belize Rural South (BRS) electorate will be voting for one of three candidates running for Area Representative, and they are José “Elito” Arceo of the People’s United Party, José Manuel Heredia Jr. of the United Democratic Party and Robert “Bobby” Lopez of the Belize Progressive Party. The election process for BRS will be overseen by Returning Officer Martin Alegria and Election Clerk Leodan Torres.
The rules of Election Day remain the same as that of past years. All political parties and candidates are expected to conduct themselves in a civil manner while abiding by the rules agreed on. No political booths or political banners will be allowed within the 100-yard polling area. Members of the media will also need to maintain the same distance from the polls and wait for an election officer to feed them with information.
In San Pedro, Polling Area 37 will be at the San Pedro High School (SPHS), with 15 polling stations broken down in alphabetical order. The 100-yard area will extend around the circumference of the school’s property. The restricted area will include sections of Spider Lily Street which runs from the beach to the junction of Laguna Drive. As for residents of Caye Caulker, they will be casting their votes at Polling Area 34 and 38 which is the Caye Caulker Roman Catholic School. Polling Area 34 and 38, will be broken down into two polling stations. The BRS constituency is made up of Ambergris Caye, Caye Caulker and St. George’s Caye with a total of 8,749 registered voters. A total of 7,844 votes are registered in Ambergris Caye, while 905 are registered for both Caye Caulker and St. George’s Caye.
The process for voting will be as usual; electors can only vote for one of the three candidates that will appear on the ballot in alphabetical order. If an elector votes for more than one person, the ballot will be discarded. In order to make the election process easier, electorates are encouraged to have with them their Voter’s Registration Card (ID) on Election Day or any other form of identification. At the polling area, the polling stations will be labeled with letters corresponding to the first letter of the elector’s surname, directing which line he/she should take to cast their vote. 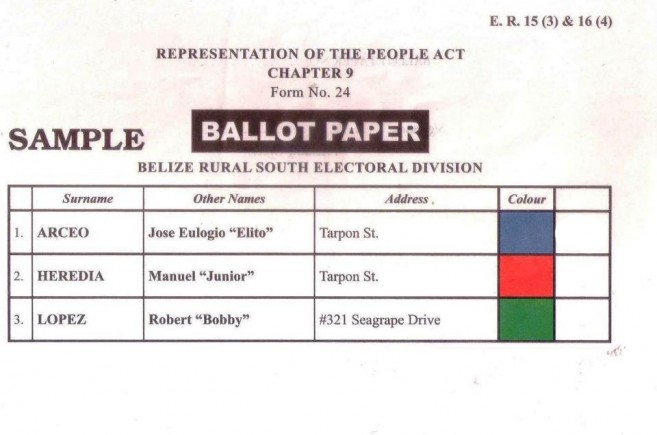 Inside the polling station the elector will be required to present a form of identification. If the person does not have an identification his/her name will be searched in the Elections and Boundaries Department Voter’s Binders to verify the identity of the person. When the elector’s identity has been found, his/her name will be called out loud. Next, the person will dip his/her index finger of his right hand into violet colored ink. Then the person will be issued with a ballot that has the signature of the Presiding Officer. The elector will then proceed to the booth and cast his/her vote and fold the ballot paper. He/she then holds up the folded ballot paper for the election’s clerk to show the signature of the Presiding Officer and then the completed ballot is placed into a ballot box. If for some reason the elector cannot vote for him/herself, the Presiding Officer will allow a family member to accompany the elector to assist him/her in casting their vote.
Polls countrywide will open at 6AM for voting to start at 7AM and closed at 6PM. At the closing of the polls, a police officer will stand behind the last person in each line. When the last vote is cast, the ballot boxes will be locked and taken to the counting station under police escort. The counting station for BRS will be San Pedro High School. Ballot boxes from Caye Caulker will be transported to San Pedro by the Belize Coast Guard personnel.
Belizeans all over the country are urged to exercise their democratic voting rights for the person and the party they think can address the current issues of the country
For live updates of the election process and results on Election Day, you can visit The San Pedro Sun website at www.sanpedrosun.com.