Government schools across Belize were closed on Monday, September 19th due to a massive demonstration that was led by the Belize National Teachers Union (BNTU). Over 3,000 BNTU members gathered in Belmopan City, wearing their signature green t-shirts to highlight issues of national importance with their “Stand Up for Belize” solidarity campaign. The protest is in response to Prime Minister Right Honorable Dean Barrow’s government decision to defer their 3% salary adjustment until April 2017. Not only does BNTU want their salary increase now, but they are also demanding good governance for the country, especially after the recent corruption scandals within the Government of Belize (GOB). 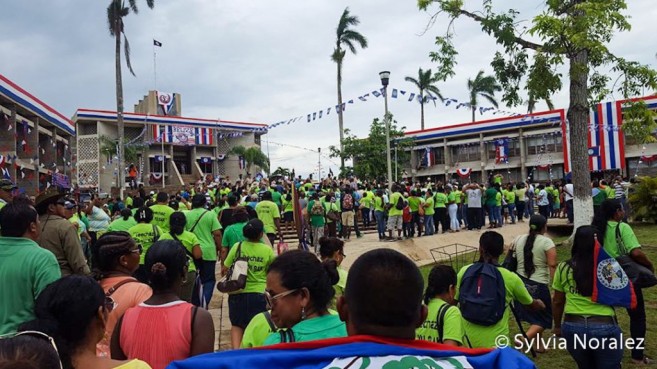 Despite the inclement weather, teachers still proceeded to host their three hour rally at the Belmopan Civic Center. Under the Stand Up For Belize itinerary was the slogan, “It’s NOT just about the THREE, it’s for COUNTRY.” Guest Speaker Addresses were given by Senator Elena Smith, Pastor Louis Wade and Evan Mose Hyde. Branch messages were also given by Branch Presidents of: Corozal Rural Area, Orange Walk, San Ignacio, Benque Viejo, Toledo Rural, Corozal Town, Belize, Belmopan, Stann Creek, and Punta Gorda.
As the government disapproved the notion, the protest was no surprise. The BNTU announced their plans last week, as principals sent home letters to notify parents that the majority of teachers would not be present at their respective schools on Monday, September 19th. The Ministry of Education (MOE) replied with a statement on Wednesday, September 14th informing parents, teachers and students that in compliance with the education rules, authorities will take necessary measures to make certain that schools are kept opened on the said date. 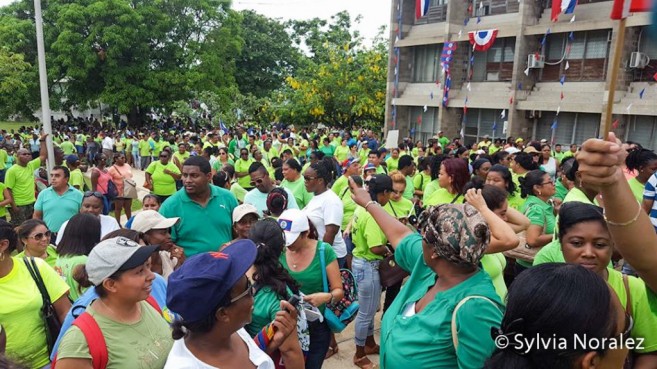 However on September 19th, through confirmation from the MOE, classes were officially canceled. In San Pedro, nearly all of the teachers of San Pedro High School were absent, 28 teachers from the San Pedro Roman Catholic School and 16 teachers from Holy Cross Anglican Primary School left the island to participate in the protest.
The BNTU called on teachers to stand up for their rights now, and in a letter to the Prime Minister issued on Monday, September 12th, explained that the GOB may face industrial action if Prime Minister Barrow does not grant their written requests. Apart from requesting a salary increase, and the removal of Senator Godwin Hulse, the BNTU also demands GOB to take the following actions:
-Urgent action by GOB to sign the UN Convention against Corruption
-Corrected measures to improve and ensure compliance with the requirements of our unjust enrichment and integrity in government laws
-Urgent corrective measures including legislative action to have and make our public accounts committee work and be effective
-Immediate and necessary action to appoint a Special Senate Select Committee to make a full and proper investigation/inquiry into the recent Auditor General’s Audit Report into the Immigration and Nationality Departments for the 2011-2013 Period including recommended, Corrective and Punitive action
-Immediate and appropriate measures to enact the Occupational Safety and Health (OSH) Bill and to formulate a Just and Fair Minimum Living Wage Legislation and Policy
-Serious and immediate action to restore (Education Rules) and to discuss and implement the unfinished section of BNTU Special Proposal 22, to ensure the just Right and employment status/tenure and Service Benefits of the Non-teaching Staff of our Secondary and Tertiary Levels Educational Institutions
-Immediate and long over-due Legislative Measures to reform and update our Social Security Laws and Benefits to expand and broaden the protection and coverage of the workers (Contributors) including the section on to and from work. 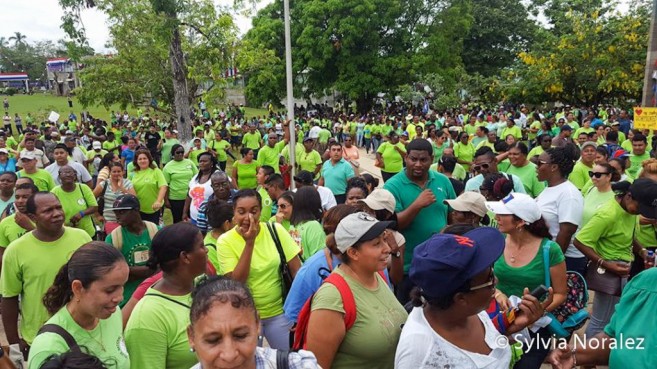 While Prime Minister Barrow agreed to some of the requests, he did not accept the full terms from the BNTU.
“I cannot agree to the removal of Senator Hulse as Police Minister, as he has done nothing wrong in that, or any other ministerial capacity. In fact, he enjoys my full confidence,” said Prime Minister Barrow.
Since the (OSH) Bill would adversely affect the business community, and particularly small businesses, Barrow explained that the GOB will be conducting discussions with the business sector. With respect to the Integrity Commission, he continued explaining that GOB is working with the Belize Chamber of Commerce and Industry to find a chartered accountant to fill a legal requirement in activating the committee.
As far as teacher’s salaries, the GOB proposed a 1% salary adjustment at first, but after union officials worked the numbers, they were due an adjustment of 3%. However, the BNTU thinks that it is another excuse from the government to defer their salary adjustment, and they’ve been waiting patiently to be paid their increase since July 2016. 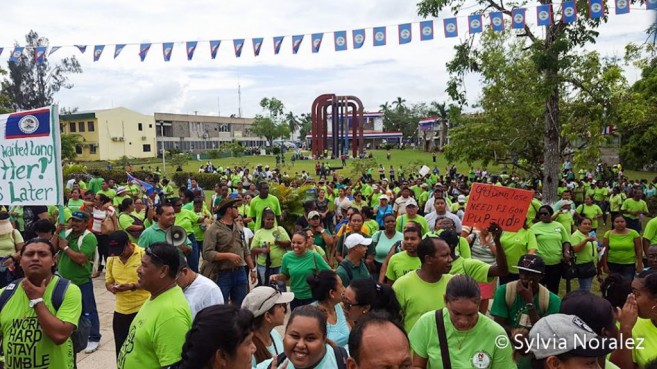 Barrow explained that both the Public Service Union (PSU) and the Association of Public Service Senior Managers (APSSM) agreed with the GOB’s request to defer the salary adjustments. This decision came after Hurricane Earl caused over 183.6 million in damages across the country, and since then, the GOB has financially assisted hurricane victims through relief efforts.
In the past Minister of Education Honorable Patrick Faber has assured the teachers that they will be getting their pay increase, and stated that the delay has nothing to do with the state of the economy, but the economic strain Hurricane Earl caused. He also stated that the GOB has been working hard to address issues that are important to the public, but believes that the teacher’s protesting is an act of bad faith, as well as a distraction that is taking time away from children in school.
“The delay that is being sought by the prime minister to the unions is not necessarily because of the economic situation. In fact, you will remember that the unions and the financial secretary shook hands and signed off on what the payment would be. And so that was intended to have been paid; enters Earl and of course you know the difficulty we saw there. So the Prime Minister, as a result of the devastation of Hurricane Earl, and the ministry of finance and the wide government having to find monies in the immediate aftermath of Earl to deal with these situations has made that plea to the group of unions that were in the collective bargaining agreement negotiations. I’m pretty sure that they met with the Prime Minister and I think it is the BNTU that primarily indicated that they need to take the issue of the delay to their membership so that they can then get back with the other unions to give the Prime Minister an answer about their position as to whether or not they can accept the proposal put forward by the Prime Minister,” said Faber. 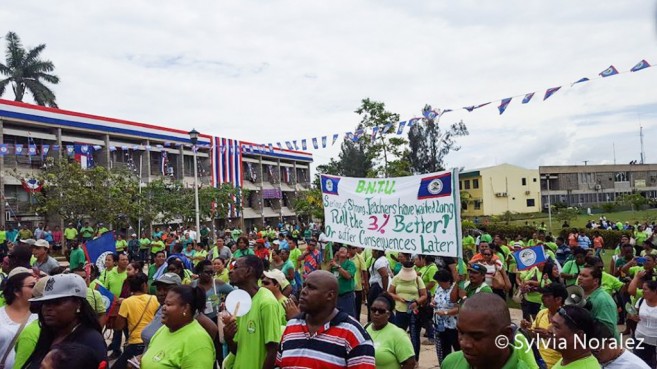 “It is not only about the three. We understand what our country means, it means the place that we will live in the future, it means the place that we have to live in now and if now things are not right then now we have to fix it and BNTU is proud, strong and united,” said Kathleen Flowers, Branch President of Belize City.
According to BNTU National President Luke Palacio, the protest was an indication that the Belizean people are serious about what they want, and their need to stand up for country. “We see the many issues that are negatively affecting this country; we need to deal with those matters. The union is an organization that is legal, that is registered, that is there to stand up despite what they are saying for the cause of workers. We are to stand up for social justice, we are to stand up for economic empowerment and we must always stand up for the territorial integrity of Belize…every day. And so when we see the pronouncements, when we see the type of pronouncements coming out of those persons who should be leading education in this country then you can ask yourself the question and you can get the answer that we have people failing the education system at the top—not the teachers, not the Union,” said Palacio.
After the speeches, the members chanted and sang their union songs to the steps of the assembly building. More than 50 officers stood in formation to ensure the security of the protestors. A minor scuffle ensued when a well-known People’s United Party (PUP) supporter was shoved by an officer for being loud. Despite that incident, the teachers accomplished their task of getting their message across to the Barrow Administration. 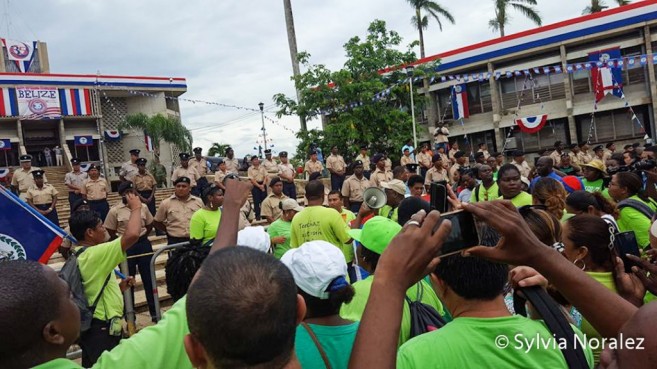 According to PUP leader, Honorable John Briceño, the teachers had every right to protest, after patiently waiting for their salary increase. He said that the economy is contracting, and the GOB is unable to keep promises made after depleting Petrocaribe funds to win elections.
“The truth of the matter is that the Prime Minister has squandered over $375 million of Petrocaribe monies—monies that could have been used in the productive sector, but he squandered it to the point where some have accused him of buying the election. He has also shackled this country with Lord Ashcroft to the tune of five hundred and seventy-five million dollars…When you look that there’s been no growth; actually our economy has shrunk by two percent in the first quarter and the second quarter it was a little under two percent….so we are in a recession. And I can bet you a soft drink that in the third quarter, we are still going to see a further contraction of the economy,” said Briceño. 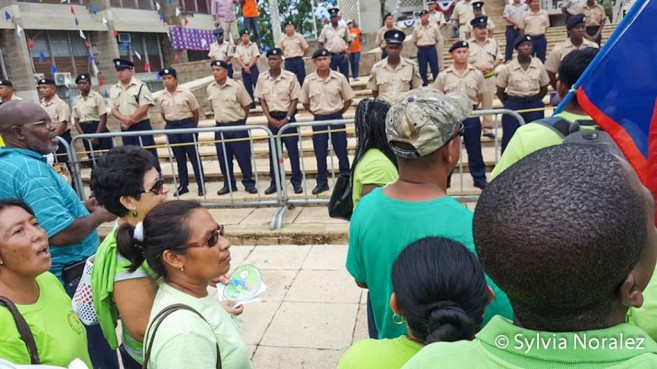 Despite the government’s opposition, Palacio announced that the union’s representatives will meet with Prime Minister Barrow on Thursday, September 22nd to compromise a solution. The BNTU states that if the GOB does not meet their demands, they will go to protest again on Thursday, September 22nd and Friday, September 23rd. If teachers still do not receive full support from the GOB, they have planned additional strikes from October 3rd to the 7th. By this time, if there is still no progress, the teachers have decided to resort to an indefinite strike.