Saturday, September 24th marked the celebration of the People’s United Party (PUP) 66th Anniversary. The PUP National Party Council met at the Belize Elementary School auditorium in Belize City, where Opposition Party Leader, Honorable John Briceño, delivered an inspiring message reaffirming the Party’s commitment to the country of Belize. All recently elected PUP Village Council Chairpersons across Belize were in attendance, and each chairperson was given a special congratulatory award on their victory. In addition, 31 George Price Service to the People Awards were given to long-serving, and deserving PUP members. Patricia Marin of San Pedro Town was the first woman to receive this special award in the Belize Rural South constituency. 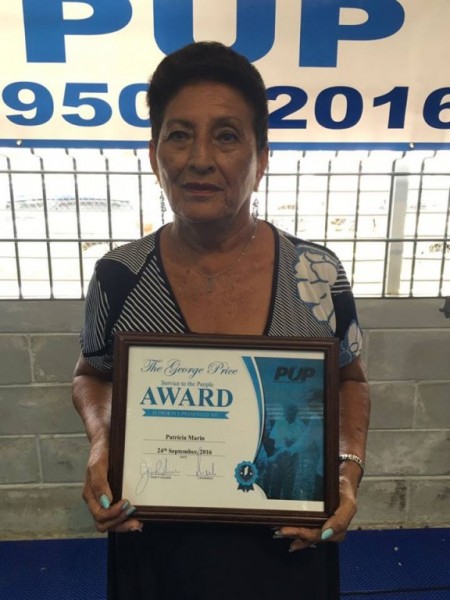 Marin was more than honored to have received the award. “It was a privilege and honor to receive the George Cadle Price award. I am so happy and humbled for that. Thanks to the Belize Rural South and the National executive. Siempre adelante y Siempre con el PUP,” said Marin.
During the meeting, the Party Council also made an announcement for the appointment of a shadow cabinet. This cabinet is comprised of 14 members: John Briceño (Finance and Governance), Cordel Hyde (Natural Resources, Petroleum and Poverty Alleviation), Jose Mai (Agriculture and Fisheries), Julius Espat (National Development/Economic Development and Investments), Kareem Musa (Attorney General, Public Utilities and Elections and Boundaries), Rodwell Ferguson (Ministry of Works), Florencio Marin (Defense/ Civil Aviation and Transport), Oscar Requena (Tourism and Immigration), Mike Espat (Public Service, Local Government, and NEMO), Orlando Habet (Health and Labor), Said Musa (Education and Social Transformation), Eamon Courenay (Foreign Affairs and Trade), Valerie Woods (Sustainable Development, Climate Change and Environment), and Paul Thompson (Broadcasting, Youth, Sports and Culture).
They are expected to keep updated with current issues affecting their assigned ministry. It was explained that the shadow ministers are to represent their party’s views on matters relating to the ministry assigned to them, and to also build stronger relationships with key stakeholders.

Update: General Elections to be held on March 7th, 2012