Former Minister of State for Immigration and Nationality Elvin Penner made his appearance at the Senate Special Select Committee on Wednesday, May 10th, for questioning about his alleged involvement in an immigration scandal in 2013. Penner was questioned on several irregularities in the approval of Belizean visas, including the facilitation of a Belizean passport for fugitive South Korean national, Wong Hong Kim, who was in a Taiwanese prison at the time of his passport approval. At the hearing, Penner cautiously answered the questions posed to him; however, he refrained from responding to questions relating to Kim. 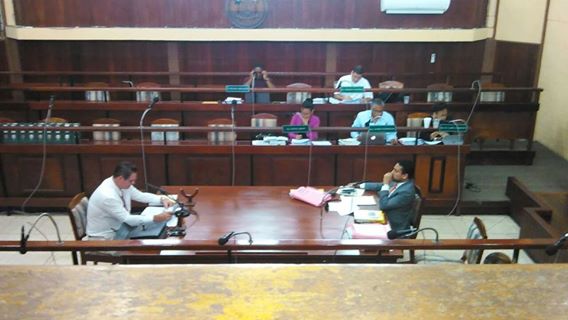 The scandal broke in September of 2013, when the Office of the Auditor General received a copy of a memorandum from the Immigration and Nationality Department regarding several missing visas. A Compliance Audit was ordered for the said department, which later broadened to include the passport incident. The report covers the period of 2011 to 2013.
Prior to the interrogation, Penner made an opening statement in which he explained why he was not going to answer questions pertaining to Kim. He cited the dismissal of two criminal charges at the Magistrate Court and an appeal at the Supreme Court in 2014 and 2015 in regards to the case. He claimed legal protection from speaking about any involvement, if any, in the scandal, and informed the Committee that he could not be forced to answer questions on the case considered closed by the respective authorities.
“I call on the protection of Section six, sub-section five of the Constitution of Belize. Under the Evidence Act, Chapter 95 of the Laws of Belize, there is no provision to compel a witness to answer questions related to his or her acquittal,” Penner cited. He also indicated that during his testimony he would rely on such Act and Chapter of the Constitution if needed, in order obtain protection against self-incrimination.
Chairman of the Senate Special Select Committee, Honourable Aldo Salazar disagreed with Penner’s statement and informed him why he can be asked questions relating to the passport scandal. “The only legitimate reason for you to refuse to answer any question is whether it is not a matter, which is the subject of this inquiry,” said Salazar. “It is my obligation to put all the questions to you, which I intend to do, referred in the report of the Auditor General.”
When the inquiry session began, Penner answered questions on his role on the approval of visas for persons who may not have qualified. Penner was accused of making many recommendations for visas, particularly to Asian nationals. When the committee asked about his reasoning behind such recommendations, he simply responded by saying that he felt it was a needed service to the public. “I don’t see it in any way unfit to make such recommendations,” he said. “The recommendation letter stated at the end, that the visas requested should only be granted if all the requirements of that application were met.” He denied the allegations that employees at the Department were pressured by him to process visa applications, and added that he never received personal benefits from making recommendations. 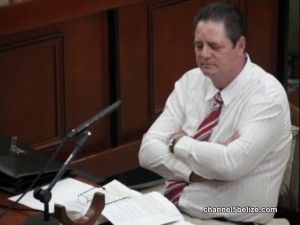 Penner also disregarded the allegation that hundreds of visas were approved. He contends that some visas which he recommended for approval were not approved. He maintains that when recommending someone it was not a seal of approval. However, he believes some people, and even Immigration Officers, thought it was.
The inquiry session then turned to the passport scandal, and while the Committee probed, Penner did his best to fend them off. More than once, he referred to his opening statement to avoid answering questions.
Penner refused to discuss an alleged appearance with him and Kim at the Immigration Department, where he personally was involved in Kim’s passport application. “I will exercise my privilege, that I do believe that I have, not to answer that question,” said Penner. “I am taking my legal advice, and whenever question comes about Kim, I will not answer.”
Salazar inquired about the passport application for Kim, which according to his sources was brought in by Penner without proper documentation. Penner reportedly promised to gather the necessary documents for the application, but never did, and after requesting the application to be passed to the Director of the Department, it was approved. However, Penner denied the accusation and indicated that all required documents were in Kim’s passport application. He furthermore stated that he never requested for a speedy approval, since it had all the proper documentation.
For the remainder of the session, Penner offered limited answers in regards to Kim. He admitted having met Kim during his business trips to China and Taiwan, but other than that, he did not reveal any incriminating information.
In the meantime, it has been rumored that the former minister is contemplating a political comeback with the ruling party. It is said that he is considering it and will make a decision depending on how the re-districting goes in Cayo North-east, for which he was the former Area Representative.
However, Deputy Prime Minister Honourable Patrick Faber, who will be taking over the leadership of the party for the upcoming General Elections in 2020, said that he does not see Penner back in his party. “I certainly don’t support him running as a candidate for our party again,” said Faber.
Attorney Arthur Saldivar is purportedly set to disclose evidence regarding the former minister’s misdeeds at the Senate Inquiry in the weeks to come. Saldivar is allegedly knowledgeable of Penner’s involvement in the immigration scandal. The next session of the Senate Inquiry is set for Wednesday, May 17th.