Ministry of Defence accused of inappropriate use of resources


The Minister of Defence, Honourable John Saldivar is being monitored following reports of inappropriate use of resources after he was allegedly caught using coast guard vessels to shuttle his basketball team (Belmopan Bandits) to and from Ambergris Caye for various sporting activities. The issue also received reaction from the Embassy of the United States, since the vessels were donated by the American Government. In view of such accusations, the Ministry of Defence issued a press release on Tuesday, May 30th, justifying the use of the vessels. 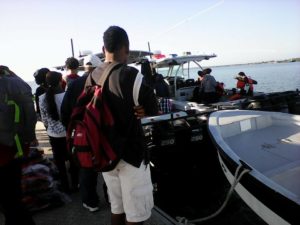 Reports of the inappropriate use of the coast guard vessels came to light on May 25th, when the U.S Embassy acknowledged the reports. The Embassy issued a statement to a local media house in Belize City, saying it did not agree with such practices, as the boats were intended to be used expressly by maritime law enforcement for patrolling Belize’s territorial waters. “The U.S government has provided training and equipment, including boats, to the Belize Coast Guard,” the note read. The primary purpose of these vessels is to deter and interdict criminal activity, particularly in support of counter-narcotics efforts.”
According to the allegations, on several occasions, as many as three vessels from the Belize Coast Guard were used to escort the Belmopan Bandits to Ambergris Caye for games. In addition, Saldivar’s family members, the team’s management and friends were taken on the boats for such matches.
After these accusations went viral, the Ministry issued a release on Tuesday, defending their rights of using the vessels and expressing their support for sports. The official note stated that the Ministry sees healthy competitive sports as a way to enhance leadership and promote unity among youth and sporting enthusiasts countrywide. “As such, the Belize Defence Force and the Belize Coast Guard have entered teams in various sporting disciplines establishing partnerships within the sporting community of Belize.” There has, however, been no indication that coast guard vessels have been used to shuttle any other sporting team other than the one owned by Minister Saldivar.
There have been no direct comments from Minister Saldivar or the Chief Executive Officer in the Ministry of Defence, Felix Enriquez, regarding the allegations. Saldivar did respond via a Facebook post on Sunday, May 28th, stating in part. “Sometimes I wonder if the wannabe leaders understand what really is happening in our society and how to really address these problems, or is their concern only to attain and maintain power. Their ridiculous attacks reveal their true motive.”
On the other hand, his Cabinet colleague, Elodio Aragon Jr., who oversees the day-to-day operations of the Belize Police Department, stated that he did not agree on the use of government resources for reasons other than what they are assigned to. He shared what he would do if a similar incident would take place in his Ministry. “We at the Ministry level, we would have to look into situations if there is abuse because at the end of the day, commanders are responsible for their personnel and equipment under their command. As I am in charge of the Belize Police Department, we would ensure that such abuses do not hamper the police department,” Aragon said.
In the meantime, the U.S Embassy is gathering additional information in order to further respond to the allegations. Saldivar’s Bandits are scheduled to play for the National Elite Basketball League championship against the San Pedro Tiger Sharks on Saturday, June 3rd in San Pedro Town, Ambergris Caye. It was unknown how the visiting team will travel to Ambergris Caye.