The Government of Belize will simply NOT pay the $90 Million judgement awarded by the Caribbean Court of Justice (CCJ) to the Belize Bank, for a $35 Million loan borrowed by Universal Health Services Ltd, which the past PUP administration of former Prime Minister Said Musa had secretly guaranteed in 2004. 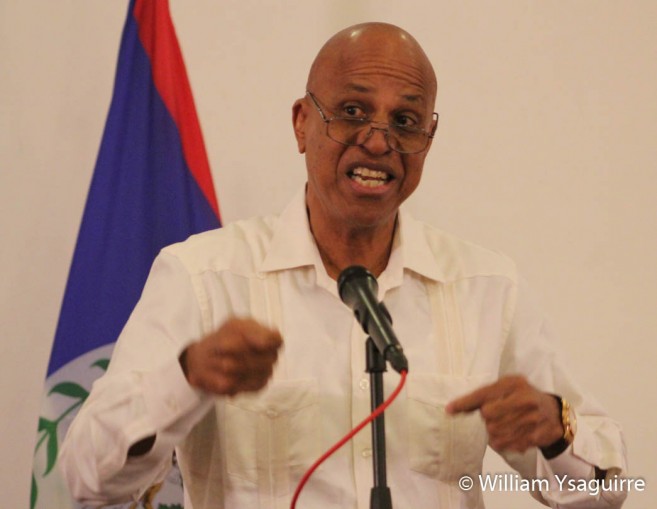 Prime Minister Hon. Dean Barrow announced his government’s position at the Belize Best Western Biltmore Plaza Hotel on Wednesday morning, November 28. He said that any payment of such a magnitude would have to be approved by the National Assembly, and that his Cabinet ministers had all indicated that they could not in clear conscience approve the payment of $90 Million, for which the people of Belize would receive absolutely nothing, not so much as a Tylenol pill from UHS Ltd. So they would vote NO on any motion for GOB to honor the CCJ judgment.
The UDP administration of Prime Minister Barrow first learned of the secret guarantee of UHS $38 Million loan, when they took office after the UDP victory in the 2008 general elections. Barrow flatly refused to honor the guarantee, saying any transaction or loan agreement of that magnitude should have been brought to the House of Representatives for approval, and since it hadn’t, it was illegal. 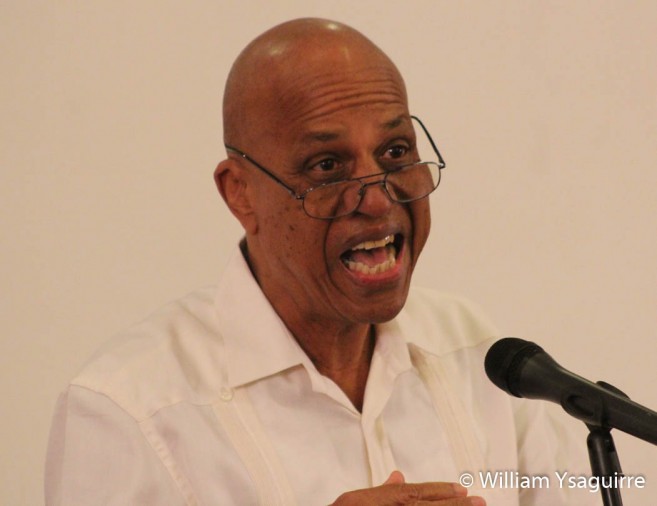 At this, the Belize Bank took the government to court, but both the Belize Supreme Court and the Belize Court of appeal had upheld the government’s position that the UHS loan guarantee was illegal. Undaunted, the Belize Bank and Ashcroft interests appealed the judgment to Belize’ final court of appeal, the CCJ.
As to why the government had allowed the litigation to go for so long, with interest accruing at 13% per annum, Barrow said that with GOB’s legal victories in the Belize courts, he had felt confident that the CCJ would deny Ashcroft/Belize Bank’s appeal. He said he was very disappointed in the ruling, but noted that the CCJ had stopped short of granting an enforcement of the judgment. 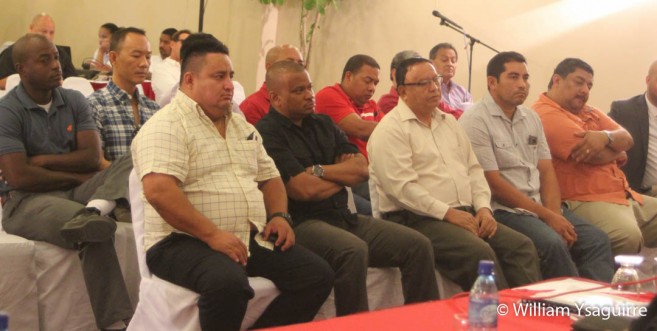 The Belize Bank won the case, but they failed to get one specific ruling which they sought, for the CCJ to order the Minister of Finance to immediately pay the $90 Million. The CCJ refused and in this regard, Barrow said that the CCJ had recognized that even they were still subjugated to the Constitution of Belize, which requires that any large payment by the government must be approved by parliament. No money can be taken out of Government’s consolidated fund unless such payment has been approved by the National Assembly. 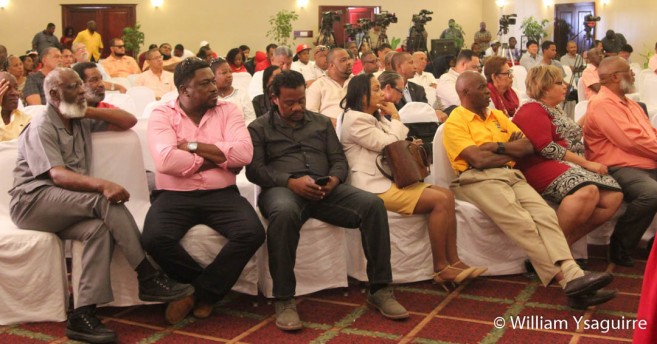 In any event, after a judgment is awarded, under Belize’s Crown rules, any such beneficiary of an award must still wait 21 days before they may present a claim to the Finance ministry, at which time the Financial Secretary would then submit the question to the House of Representatives for a supplementary allocation to be made to pay the award.
And such approval in the National Assembly, the Belize Bank, and Ashcroft interests will never get. Barrow said he was confident that such a bill will never get the House’ approval. He said that while the judgment may be legally valid, it was the government’s view that it was morally reprehensible, and so it was the government’s responsibility to the people of Belize, to vote NO to such a payment. So the debt will remain unpaid, and Barrow said this would not be the first instance in which a government of a country had refused to pay a debt which is regarded as unfair and unjust. 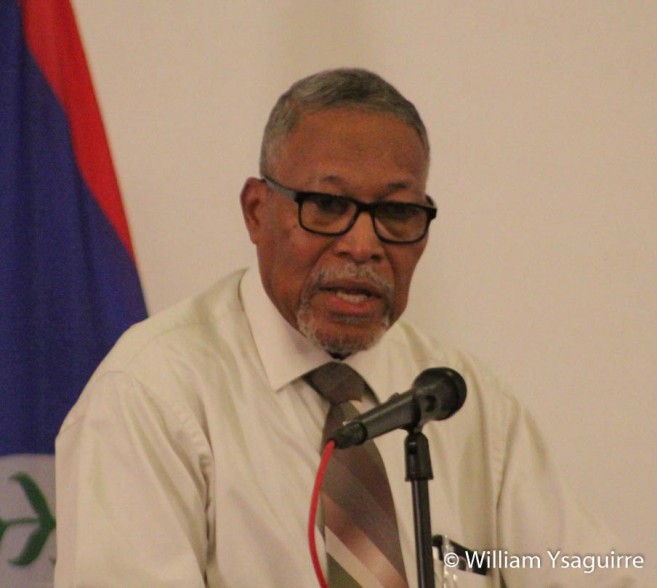 At the press briefing, Barrow was flanked by the Minister of Labor Hon. Senator Godwin Hulse who gave a long recital of the sad saga of how the original UHS $30 loan came to accrue interest until it was a $38 Million debt, by the time the Ashcroft interests took their dispute to a London International Court of Arbitration which had ruled that the debt should be paid. Prime Minister Musa had kept the $30 Million guarantee secret even from his own Cabinet ministers. As the nine years of litigation wore on, the 13% interest kept accumulating until the debt is now $90 million
Barrow said he had felt vindicated when both the Supreme Court and the Appeals court upheld the government’s denial of Belize Bank’s claim. 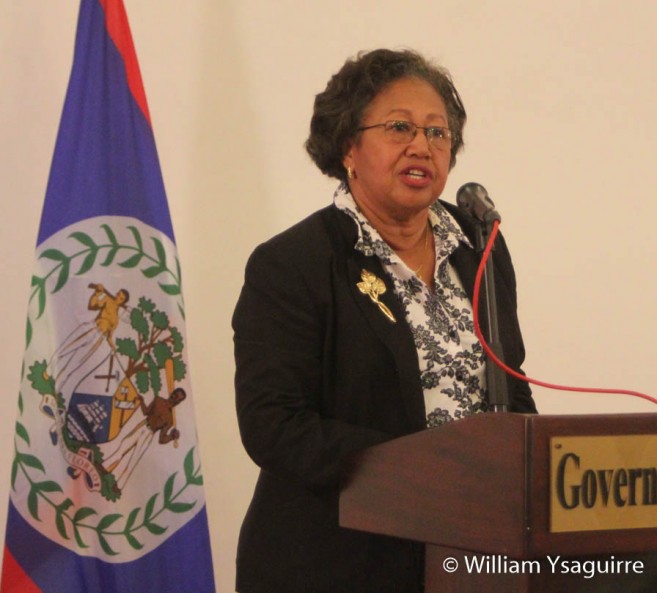 Barrow also had at his side Minister of State in the Ministry of Finance, Hon Senator Carla Barnett, who explained that although she was Financial Secretary at the time, she knew nothing of the secret guarantee, until UHS fell behind in its loan payments, and the Belize Bank sought compensation from the GOB guarantee. When former Prime Minister Musa admitted publicly to a question from the media, that he had not informed Barnett of the secret guarantee; because he did not think the Financial Secretary needed to know. At this public dismissal of her worth and service to the nation, Barnett felt obliged to resign her post forthwith and left office the same day.
In subsequent question and answer segment, Barrow clarified that despite his disappointment in the CCJ’s decision, Belize would retain the CCJ as its highest Court of Appeal.