With less than six weeks remaining before the 2018 Municipal Elections, the Belize Rural South People’s United Party (PUP) Town Council slate held a public meeting on Thursday, January 25th as part of their on-going campaign efforts. At the meeting, some of the main issues affecting the island were discussed, touching on crime, transparency, and infrastructure. The gathering also included specially invited guests, Mayor of Orange Walk Town, Kevin Bernard along with his Deputy, Ian Cal, who addressed and motivated the attendees on the capabilities of a PUP. 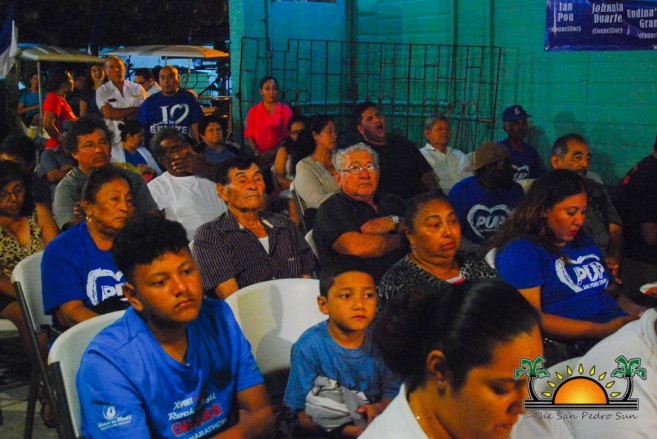 Over a hundred persons attended the meeting which started shortly after 7PM at the residence of Mrs. Evelia Paz. Mistress of Ceremonies Natalie Arceo introduced the candidates running for the councilor’s seats. Each of the candidates present, Johnia Duarte, Ruben Navidad, Marina Kay, Ian Pou, and Undina Graniel shared with the audience their plans for the town. Some of the topics they briefly discussed included education, the well-being of island residents, garbage issues and fighting corruption. They all indicated that under a PUP Town Council, many of the issues on the island can satisfactorily be solved.

Orange Walk Deputy Mayor, then delivered his opening remarks. Cal started by wishing the best for San Pedro Town, pointing out the capabilities of the municipality. “I always call this town, the ‘Republic of San Pedro’, because it is a town that can be self-sustainable and doesn’t have to depend on any government to be able to get its projects done,” said Cal. “After visiting other sides of this town, I was disappointed. You can see the lack of vision and how it has been neglected by the administration of the United Democratic Party Town Council.” Cal stated that after knowing that The San Pedro Town Council (SPTC) collects in revenues over $7 million dollars a year, he believes that the town’s situation could be much better than how it is today. “This amount of funds can work wonders for a town like this, however, only with the right people and good management,” said Cal, expressing that only with a PUP Town Council such achievements can be done. “We have very capable individuals in the PUP that can run this town, properly manage the affairs of this municipality, and once that is done, then we can move forward.” 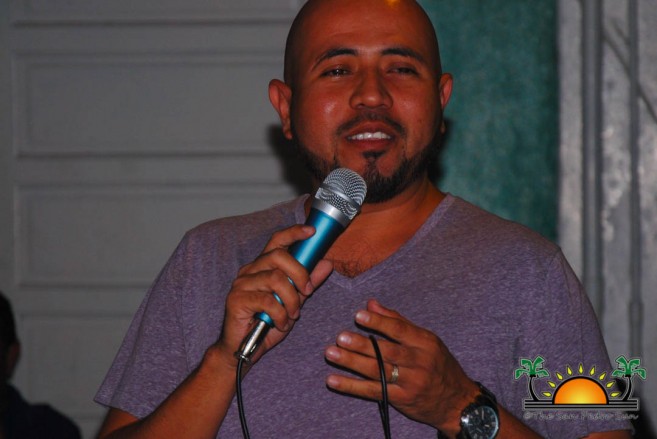 As the meeting proceeded more supporters began arriving at the venue, eager to hear more from the presenters. Mayoral candidate, Andre Perez was next to the microphone speaking on the recent spike in crime affecting the island. “There is a serious issue affecting our town at this moment for which we must hold the SPTC accountable for it, and that is a crime,” said Perez. “We have a problem in our hands; what are the local authorities doing? All they did was send out a press release stating that they are concerned about the situation. But the only way we can get out of such situation is with a responsible leadership that could identify a problem and deals with it.” 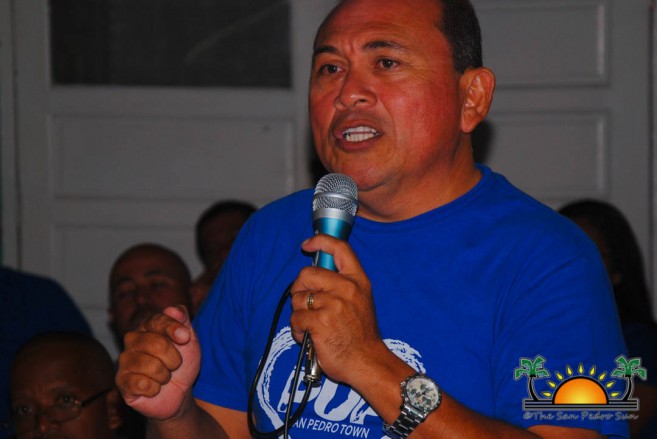 Perez noted that there are no committees within the SPTC. “Only one person is making decisions when it is a team of seven persons elected,” said Perez. “We need to create committees to deal with issues related to trade licenses, liquor licenses, traffic department and even in the housing unit as well. We need to activate all these committees, and all our councilors will be part of this system along with the people. It will be a partnership between the local authorities and the people of San Pedro.” Perez kept reminding everyone that the management of a town has to be a team effort and that his team will work with the people and for the people. He also mentioned about the creation of a finance committee to manage the funds of the different areas of the SPTC. As part of their transparency commitment, Perez emphasized on a detailed financial report to the island community within the first 60 days after taking office. 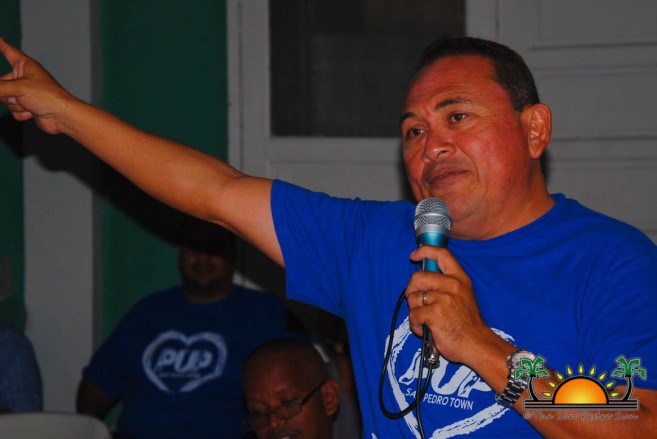 He also touched on the issue of garbage and street infrastructure on the island. He claims that under a UDP administration for over a decade there is little to no advancements. Perez spoke about the millions of dollars that go out of the island in taxes to Central Government. “But what have they brought to this town? Where is the hospital?” he kept asking. The infrastructural projects for the upgrading of highways in other parts of the country in contrast with the street infrastructure on the island including the dire conditions of the Fire and Police Station were also mentioned by a concerned Perez. “Nothing comes back to the island,” he said. “We need to hold them accountable and let them know that we are tired.” Perez ended by asking their supporters to continue spreading their message that is time for a new change. 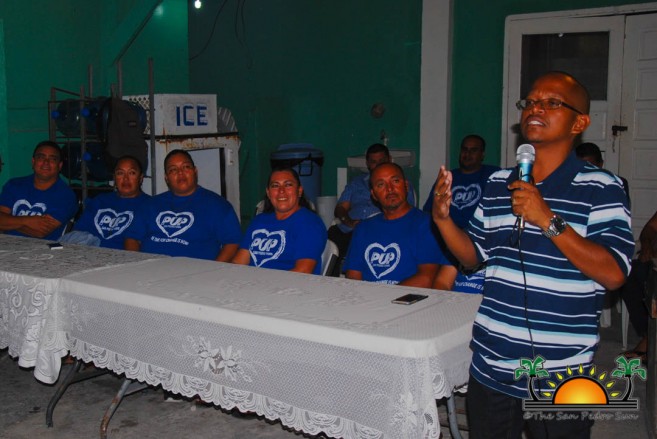 Orange Walk Mayor, Bernard also asked the attendees to support the PUP 7 slate for San Pedro. He shared with everyone the challenges his PUP Council has had to face when they got in power in 2012. “In order for us to have done what we have done in Orange Walk, I needed a good team, good administration and dedicated people. Also very important, the community support,” said Bernard. He stated that without the assistance of Central Government they have been able to pave 60 streets in Orange Walk, develop their parks, provide internet in public areas and better their relationship with the business community. “I love San Pedro, I don’t come here too often, but when I come I get disappointed to know how much things can be done in this municipality from all the revenue collected in taxes,” said Bernard. 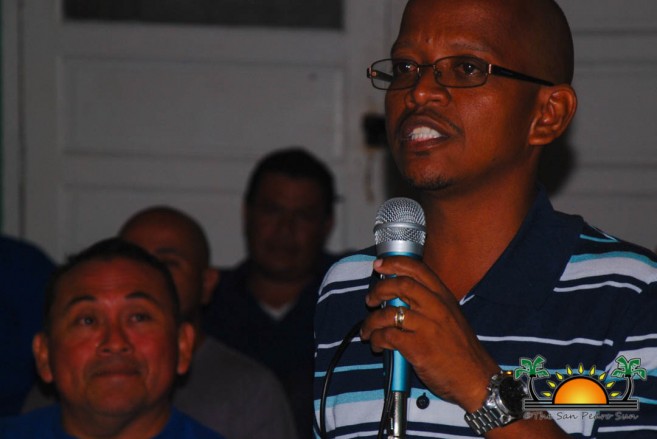 “This town would not need the intervention of Central Government to get out of any trouble. Also, a responsible Council for you all to see real transformation and development in San Pedro, you need a good leader and a good team. Because is not just the Council that will make things happen, it will be their good administration that will make sure things run efficiently,” expressed Bernard. He urged the party supporters on the island to support Perez and his team, a team he endorses and predicts to be responsible and get the job done locally with the revenues collected and then invest back in the people. 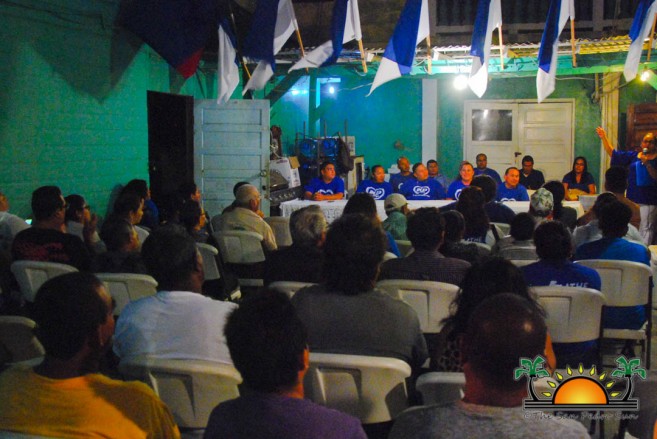 Perez, his councillor’s candidates, along with the specially invited guests pledged to bring the change needed and humbly asked their supporters for their vote of confidence on March 7th. At the same time, everyone was invited to attend the upcoming PUP Convention to be held in Belize City. The date of the event was first scheduled to take place on Sunday, January 28th, but due to inclement weather it was postponed until Sunday, February 11th.