The Belize Rural South People’s United Party (PUP) slate launched their manifesto on Saturday, February 17th in front of Evelia Paz residence at the end of Barrier Reef Drive in San Pedro Town. As the 2018 Municipal Elections draw near, the event gave the opportunity to the aspiring candidates to present what they want to accomplish if they manage to be elected. Present at the launch was PUP Mayoral Candidate, André Pérez, the six councilor candidates and PUP Party Leader, John Briceño, who addressed a large crowd of supporters. 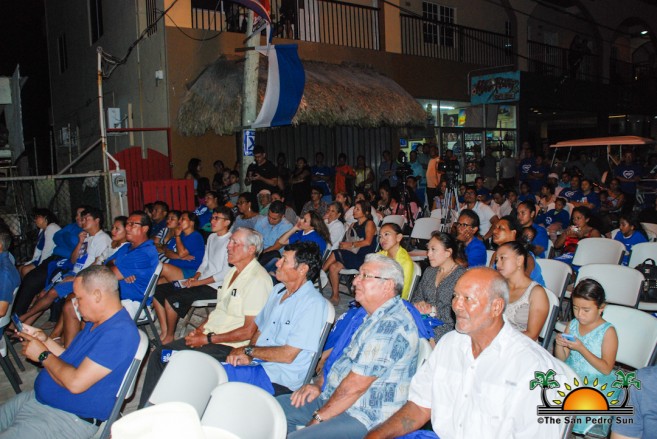 The event began at 9PM, with Master of Ceremonies, Alex Nuñez, welcoming the attendees and thanking them for their presence. This was followed by the singing of the National Anthem, and the national prayer by Santos Acosta. Nuñez then invited the first counselor to the podium, Ruben Navidad, who thanked the attendees for their support and decided to speak on the street conditions of the island and other infrastructural issues. “As everybody knows, the conditions of the streets are one of the many issues on the island. The PUP 7 pledges to upgrade and pave nine miles of streets. Also to better the infrastructure in our community including better drainage, improve the conditions of parks, increase beach access to islanders and many more. So on Election Day, make a change and vote for PUP,” said Navidad. 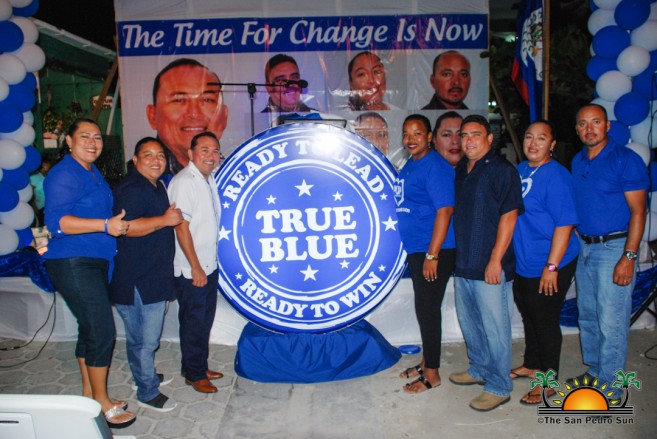 One by one, the remaining candidates thanked everyone for their support, urging them to make the right decision on March 7th by voting PUP 7. Aspiring councilor, Dianeli Aranda spoke on the high crime rate that the island is presently facing. “Our children deserve to walk on safer streets, our families deserve better neighborhoods. Like I always say, it takes a village to raise a child. We cannot continue to have streets filled with crime due to lack of leadership in our community. This PUP 7 will not only solve the problems that our island is confronting but also create a society of equality. That’s why I am asking for your support on Election Day,” said Aranda. 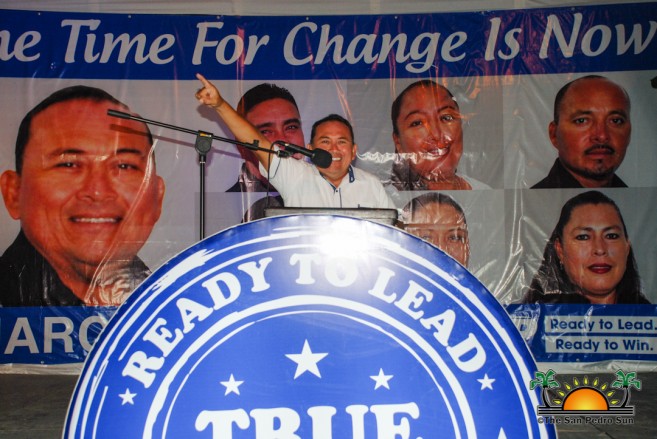 PUP, Mayoral Candidate, Andre Perez then shared a few words. “We are working hard for all the people of San Pedro Town. This PUP 7 has engaged in an active campaign like you haven’t seen for the past 15 years. We have heard all the issues that our people are going through and they are tired and ready for the change. This action plan that we present to you today, was not created by me and the councilors, it was created by all the islanders that shared issues affecting them and their families. We ask you, to give us the support on March 7th, and we promise you that within 60 working days we will present to you a comprehensive financial report for you all to know the state of affairs of this town. We have done all the hard work during our campaign, and I want to invite all islanders to come out and vote. For the past elections, the United Democratic Party (UDP) has come out victorious because all our residents of San Pedro Town didn’t come out and vote on Election Day. I have faith that on Election Day you will say: no more suffering, no more of the same thing that has been going on for the past 15 years. Vote PUP 7.” 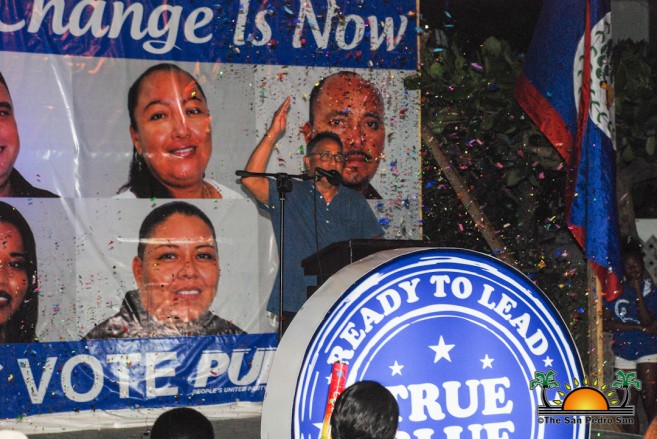 Party Leader, John Briceño, was then invited to deliver the Closing Remarks. “It is a pleasure to be here on La Isla Bonita, which will be even more beautiful after March 7th when PUP comes out victorious. Everywhere we go people are saying that they are tired of corruption and ready for a change. The UDP has been mismanaging the Town Council of San Pedro for 15 years, billions of dollars have been spent on nothing. I know that that the people of San Pedro will remember all the injustice that the UDP has done to them on March 7th, and make André Pérez the next mayor of the island. I am here today to tell you all that I fully support this manifesto, André Pérez, his councilors, and the action plan that they have presented to you.” Briceño further stated, “More than 500 million dollars from Petro Caribe were spent, how much of that money was spent in San Pedro Town? So many streets could have been paved. Schools could have been constructed with that money. When I reach to the Belmopan office, I promised all San Pedranos’s, that I will work closely together with André to pave those nine miles of road, construct more schools for the children of Ambergris Caye and most importantly secure a hospital for the island. Everywhere we go we find that crime is one of the major issues that our country is facing due to the corruption of our government. Today we have the most corrupt ministers and leaders the country of Belize has ever seen. In 2018, the country doesn’t have any money but now they are all billionaires. We cannot continue to have a society with rich politicians and poor citizens. Especially here in San Pedro Town, you guys should not be having poverty but rather be a place full of opportunities.” Briceño also mentioned that when he becomes Belize’s next Prime Minister he will continue to work closely with the United Nations to establish and fully enforce the anti-corruption regulations by investigating all ministers.

At the end of the event, attendees got to enjoy delicious refreshments while watching a dance performance by Mystic Mass Band. The following day, Briceño once again joined the San Pedro’s PUP 7 in their campaign trail where they visited various homes on the island. The PUP 7 are confident with all the hard work they have done and ask islanders to vote for them on March 7th.