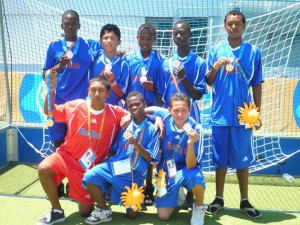 A delegation of 12 representing Belize’s Special Olympics team left on June 17th to Athens, Greece to participate in the World Summer Games. With money raised through the efforts of many, the 5-a-side football team was able to attend, participate, and in the end, bring home the bronze!

Belize was grouped with Indonesia, Singapore and Chile. The pool worked in such a way that the teams all played against each other once. The top two teams played for Gold and Silver, while the remaining teams played for Bronze and 4th place. Over the course of three days, Belize faced off against Indonesia, Chile and Singapore (respectively).

According to Andy Aspinall, Head Coach for Team Belize, the team was understandably nervous when they faced Indonesia for their first game. While the game got off to a good start, mistakes and nerves affected the team in the first half as at the fifth minute, the players found themselves down 1-0. However, they persevered, and with an amped up defense, Indonesia hardly managed to make it out past their half. According to Aspinall, he thought “Coach Raymond Sanchez and Charles Gutierrez where going to blow a blood vessel they were shouting so loud and hard.” With five minutes left to play

in the first half, Lady Luck smiled on Belize, and Jerrilee Valentine shot the ball through the Indonesian net. Belize had tied the game, 1-1.

There was an excited tumbling show as Belize’s fans have come to expect when the team is especially pleased with their performance. Then it was back to work hard, as Belize was not content to tie. In the last five minutes of the game, luck struck again, and with an assist from Ernest Lambey to Sidney Rhaburn, Belize slammed in one more goal, bringing a much needed first win with Belize 2 – Indonesia 1.

The second match against Chile did not have the same results, as Belize lost the game 2-0. That meant that in the fight against Singapore, aiming for Gold or Silver, Belize had to get a win or draw. Sadly, in the last few seconds of the game, Singapore was able to get the edge over Belize with a final score of 3-2. It was up to the results of the game between Chile and Indonesia. If Indonesia won or drew, Belize would have the chance for gold or silver. Luck was not on Belize’s side as Chile ended up with the win (3-1).

While disappointed, Belize still had a chance to take the Bronze in the game against Indonesia. With the last opportunity to make a m

ark, Belize applied pressure straightaway. After a pep talk in which the players were reminded of what a win would mean for their people back home, it seemed that the team was in the right frame of mind to get a win. By the 25th minute, Belize was up 2-0. When the final whistle blew, Belize had managed to capture the bronze.

Said Aspinall, “I know it is not a gold [medal] and believe me we were more than capable of getting the gold but we had done extremely well. We are a team of boys in a man’s competition and should be proud of what we have achieved. We have shown we are a great football nation, have gained the adulation, respect and friendship of everyone we have played and met and we have a very bright future ahead…The team worked as a team, they worked hard…”

In a competition of 34 teams, Belize finished 7th. Even though Belize missed out on playing in the elite group, it did make the second group. The Belize Special Olympics team has certainly made its mark, spreading the news that Belize is a proud nation of friendly people who excel at sport. The team has been a worthy ambassador for our country. Congratulations and job well done!