The games continued this past weekend with another six hotly contested games. On Friday, September 30th, Boca Juniors went up against Underdogs and won the game in a score of 1 – 0. On Saturday October 1st, Juventus won Belizean Shores in a tight game, ending in a score of 3 to 2 while San Pedro Football Club took Legends in a score of 3 to 2.

On Sunday, notwithstanding the showers, Legends came out in full force and proved victorious over Belizean Shores in a score of 3 to 0. Joker wasn’t too far behind, winning San Pedro Football Club in a score of 2 to 0. Castillo’s won the last game against Caribbean Depot in a score of 4 to 2.

So far seven teams have played a total of five games, while two have played six and one team has played its seventh game. Below find a table of how the teams stand.

The games continue and the schedule for the next two weeks is as follows; 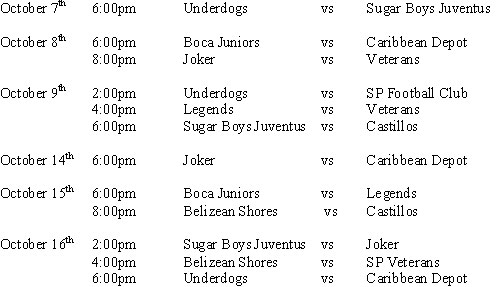 Come out to the Ambergris Stadium and enjoy the games.

Francis Fonseca sworn in as Leader of the Opposition3 Photos