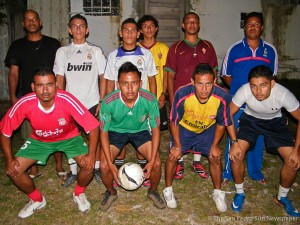 The 2012 Football Competition of the Premiere League of Belize (PLB) is scheduled to commence on Sunday February 5th. The San Pedro Seadogs qualified to compete in this tournament and have been practicing for the past six months.

The team, presently comprised of 25 players, including two under 17 players, will be travelling off the island for both home and away games for a total of ten games. The advantage of having home games is to have the games played in the team’s home location where more of the fans can come out and cheer. In general, teams perform better when they have the home advantage.

The San Pedro Sun spoke with Mr. Mayito Perdomo, president of the PLB, who explained why the San Pedro Seadogs are playing their HOME games in Belize City. “The San Pedro Football Club had agreed that when they were setting up the requirements of where San Pedro would play that until the San Pedro Stadium is proper, they would instead play in the City”, stated Perdomo. 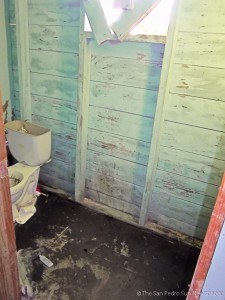 The condition of bathroom and changing facilities at the Ambergris Stadium

Registered local representative for the team, the PLB and the Football Federation of Belize (FFB), Mr. Edon Rowley explained what modifications are needed at the stadium in order for the FFB to give the OK for home games to be played on the island. “The Stadium itself is the responsibility of the Town Council. Three things we needed to do; build a new proper changing room, new and kept bathroom facilities for the spectators and players and the construction of a proper main gate. In November of 2011 the PLB, working under the FFB informed the team representative, myself, of these modifications that needed to be done so that home games could be played here in San Pedro. Placencia was worse than us and got the same directives and they stepped up their game. Their stadium now meets the requirements that their home games will be played in Placencia”, stated Rowley

According to the president of the FFB, “We could always revisit the facility and look at it when the San Pedro Football Club give us the word. The FFB has on record the letter that was sent to the SPFC where they have agreed to play out of Belize City until such time when the required changes are made”.

According to Mr. Rowley, all efforts have been made to coordinate with the San Pedro Town Council to have these improvements made but he states that he was simply told, “I only have one more month left”, by the Mayor. The San Pedro Sun contacted the Town Council for a comment, but the relevant authority was unavailable. With this, the team is forced to travel for all their games. Presently the team counts on the support of only three individuals; Mr. Doug Penland, Mr. Kurl Bell and James Ward Robert of Belize Hutz; with a required budget of $15,000 in expenses.

The team representative clarifies that no team member is being paid to play. All the players are on the team because of their love of the game and their desire to represent. The team is looking to the community for their support in alleviating the financial burden on the team. Any businesses or individuals wishing to sponsor the San Pedro Seadogs may do so by contacting Mr. Edon Rowley at 630-0235 or Ronald Ferguson 651-0627.

Schedule of games to be played by the San Pedro Seadogs are as follows: