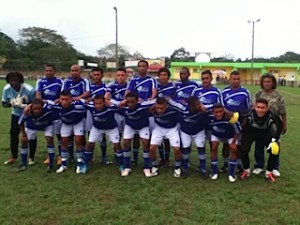 The 2012 Premiere League of Belize (PLB) Football Competition, originally scheduled to commence on Sunday, February 5th was postponed and commenced one week later on Feb. 12th. Two games into the competition, the San Pedro Seadogs are going strong with one draw and one win.

On Feb. 12th, the Seadogs travelled to the Cayo District where they went up against the Belize Defense Force (BDF) at the Norman Broaster Stadium. In this game, the boys played fearlessly and emerged with a draw. In the 12th minute of the game, Jesse Smith placed the Seadogs score board with the first goal. With Kenny Witzill scoring the second goal in the 22nd minute, Seadogs were confident of their win.

This was, until Brian Waight managed to put the BDF on the scoring board in the 43rd minute of the game. In the 90+2 minute of the game, Harrison Tasher managed to score a second goal for the BDF, bringing the game to a tie.
On Feb 19th, Seadogs left the island once again to compete in what should have been their first Home Game, at the MCC Grounds. This time around, they went up against World FC. SP Seadogs shined in this game, in a score of four to two in their favor.

Kenny Witzil was the first to put the Seadogs on the score board in the 19th minute, then again in the 57th minute. This was followed by Onri Meza of World FC who scored their first goal in the 71st minute. Two minutes later, Seadog’s Francisco Majia scored the third goal in minute 73. Carlos Vasquez, at the 85th minute, managed to score the second goal for World FC, while Jesse Smith ended the game with a fourth goal for Seadogs in the 90 + 2 minute of the game.

According to Seadog’s Captain, Kent “Bob” Gabourel, it is the team’s hope that the San Pedro Stadium should be up to par in time for their home game on March 17th.

The team is still looking for sponsorship. Anyone wishing to be a part of the SP Seadogs through sponsorship can do so by contacting Mrs. Susana Eiley at 662-2121.

The schedule of games to be played by the San Pedro Seadogs are as follows: