The team, along with coach and supporters travelled to Burrel Boom Village on Saturday, March 3rd to compete in the NRST hosted by Belize Rural High School. In the semi-final game pitcher Konrad Gonzalez and the SPHS boys only needed one inning of work to dispatch the boys from Escuela Secundaria Technica Mexico in a game of 15 to 1. 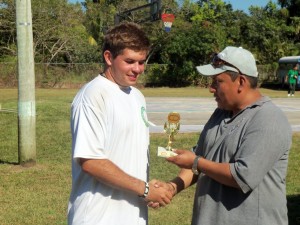 SPHS went up against Belize Rural High School in the championship match, where they managed a win with a score of 12 to 3. At the end of the tournament, San Pedro’s Jeffrey Cole Ray was awarded Most Valuable Player of the tournament. According to coach, Marion Mejia, the SPHS boys have been practicing for the past six months in preparation for this tournament.

The boys continue to practice weekly Mondays through Thursdays from 4-6PM and ‘pretty much all day’ on Sundays. The team also played a total of six practice matches against various schools from across Belize in preparation for the regional’s.

SPHS now joins Independence High School from the Southern Region and finalists from the Central and Western Region, which are yet to be determined at nationals.

The SPHS would like to extend much gratitude to Paul Kelly, Dave, Jo Nisbet and Mark Tatko of International Sports Outreach; Derrick Jones, Brandon Bood, Elsa Paz and the former San Pedro Town Council, parents and fans for their support.