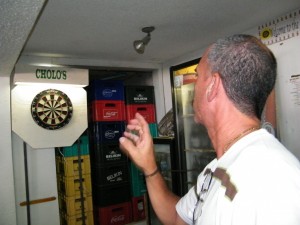 On Saturday April 14th and Sunday April 15th, darts players from around Belize convened at Cholo’s Sports Bar for two days of darts activities. The event served two purposes, first to complete the national team that will represent Belize in the American Darts and Caribbean Darts Cups that is scheduled for July 2012, and secondly, as an open tournament that served as practice matches for the national team. 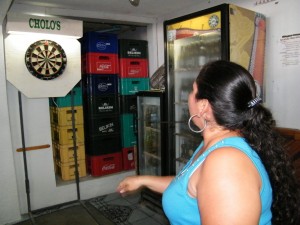 Taking $200 and the first place win in the Open Doubles were San Pedro’s own Mario Graniel and Dimas Guerrero. Placing second were Caye Caulker’s Jim Novelo and Emmanuel Gabourel; both taking home $140. In the Ladies Singles, Maria Osmon captured first place and she took home $90, while Cecelia Joseph settled for second and took home $45. The two top females were both from Caye Caulker Village. In the Open Singles, Wilbert Perez of Caye Caulker took home fist place along with $250, while Ricky Manzano of San Pedro settled for second and took home $150. Congratulations to all who participated, and special congratulations to those who have qualified to represent Belize in the Darts Cup this July.