Tuna are a NO SHOW for the Second Annual Slam 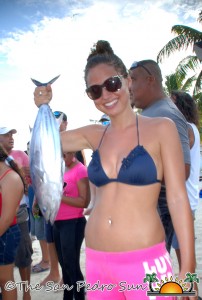 Word was out that it was Tuna Tournament time, and the smart fish hightailed away from the usual fishing spots. On Sunday, September 9th, Caprice at the Holiday Hotel was the venue for the second annual Tuna Slam Tournament, and anglers took to sea as early as 5am and returned in time for weigh in at 5pm on the beach at the Holiday Hotel.

This year’s tournament saw 11 boats and about 40 anglers competing to win up to $4,200 in cash prizes and trophies. The entry fee for each boat in the tournament was $100, with a $50 fee per senior angler and $25 per junior angler. The first place winner would win the proceeds of all entry fees, while second place was to take home $750. Trophies and prizes were slated for top junior angler, top female angler, biggest tuna and the biggest dorado captured would win $500 donated by Dr. Adrian Heusner.

While there were many competitors, it appears that the tuna just did not want to bite during this tournament. In order to qualify to be entered in the tournament – the tuna had to weight at least eight pounds. The biggest tuna caught on Sunday weighed in just around seven pounds. With this, there were no first or second place winners.

The organizers however decided to award the trophies and prizes to Top Female Angler and Top Junior Angler. Top junior angler was shared between Byron Lara of the “Reel Deal” and Daniel Gonzalez of “Baby Robert”, who both caught an 11.5lb dorado each. Byron took home the Junior Angler trophy while Daniel received a $100 gift certificate courtesy of Caprice. Top Female Angler went to Carla Rodriguez on the boat “Reel Deal” who caught a 12 lb dorado. She won the Top Female Angler trophy along with a $100 gift certificate from Caprice. Dr. Adrian Heusner won the prize he had donated for catching the biggest dorado at 20 lbs. So, what happens to all that prize money that no one was able to win? Organizer Henry Beisner informed The San Pedro Sun that the prize money will be used for the next tournament.