The country is filled with young aspiring individuals. They dream big and work hard towards accomplishing their goals. San Pedro Town, Ambergris Caye, is no different. As you walk the streets you come across hopeful musicians, artists, athletes and entrepreneurs. This week, The San Pedro Sun takes the opportunity to formally introduce our readers to a young man who has inspired many with his ambitions and amazing athleticism. At the young age of 17, Eric Donis has already accomplished much, having athletically competed both locally and internationally and represented very well – bringing home countless trophies and medals.

But did you know that as a child, Eric’s interests did not include sports? He confessed to The San Pedro Sun that it wasn’t until around the age of nine that he became interested. “I used to be the slowest at everything. This was until I turned nine, and then I started playing sports. I didn’t really know anything about sports. Around that age I met a friend and he introduced me to another friend who was very athletic and got me into sports. I started off playing basketball and soccer. And then one day I went running with my brother and his friends. This is when I discovered what I was really good at. I quickly realized that unlike my brother and his friend, I didn’t get tired. I noticed that I could have gone more and that’s when I realized that I was a runner.” This realization came to him at the tender age of 14. 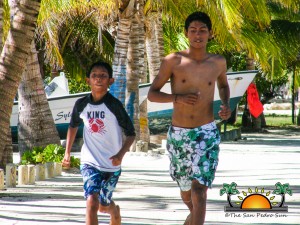 Since then, Eric has competed in approximately ten races. In those ten races, he has placed first in six of them. So just what is his motivation to compete and run? Eric says that he is really competitive, but there is a much more important reason to his drive. “I have a younger brother and I want to show him what racing is about. I want to make sure he grows up and sees the potential. I’d say I do it for the kids to show them that stuff is possible if you try hard enough.”

An average day in the life of Eric Donis includes getting up, having breakfast – this is very important. “I get up, brush my teeth, take a bath and I always eat breakfast, I never skip breakfast.” Following this, as any other 17 year old, Eric attends classes at the San Pedro High School. Following his academic routine, Eric retires to his home where his daily routine of training commences. “Training for me is running. Generally I run for three miles and time myself. I’m always trying to beat my time. If after three miles I feel that I can go longer, then I go for six miles.”Now one might wonder – why is this young man training so hard? Well, Eric has a dream – and while others might see it as nearly impossible, he believes that it is very much within his grasp, and he will do everything in his power to accomplish that dream. “In the next four years, I plan on making it to the Olympics, particularly the Triathlon. For me to compete in the Olympics; there’s just one thing that I need and that’s a really good racing bike. Like a key used to open the door to a house, a really good racing bike will open the possibilities for me to reach the Olympics. I definitely see this as something I can accomplish and I will accomplish.” 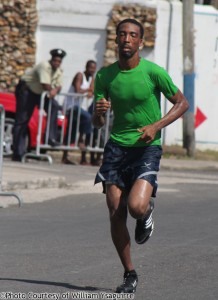 The San Pedro Sun believes in Eric, and we cannot wait to report on his fantastic achievements leading up to 2016! So many incredible feats have been performed and under much more dire circumstances; there is certainly nothing that should hamper Eric’s progress. We will keep an eye on this young man, and encourage other youngsters who have similar ambitions to look to him as inspiration, and to acknowledge that hard work, dedication and the will to succeed is very much a big part in becoming what one dreams of!
Go Eric!