Tuff E Nuff on the road to back to back championship


Local island representatives to the National Interoffice Basketball League (IBL) Tuff E Nuff are on the road and determined to win a back-to-back championship. In the first of five games in the finals, Nuff E Nuff defeated No Limits of Belize City on Friday June 21st. The island’s team entered into the final with a new record in the IBL’s recent history – undefeated in the regular and knock out seasons.

In game one, No Limits took an early lead in the first quarter; they scored 23 points while Tuff E Nuff hung behind with 19 points. By the end of the second quarter (half time), Tuff E Nuff took its first lead of three points, ending the first half with 46 points compared to No Limits’ 43 points.

In the second half of the game Tuff E Nuff went with all it had. The third quarter saw them take a six point lead with 66 points. The largest lead in the game came in the fourth quarter when No Limits was dominated by Rico Black’s Tuff E Nuff. The islanders took a 15-point lead which they held on to until the very end. At the final whistle, Tuff E Nuff had scored 90 points over No Limits’ 75 points. Tuff E Nuff’s Winston Pratt was the star of the night having captured 13 rebounds and 28 points.

“We were looking forward to lead in the finals and we did that. Our team understood what we were going for – a win. Looking at the other games ahead, we are working to end the series in game three. We are going with everything we have. We will not be like the San Antonio Spurs that lost their championship in game six; we are going with everything from the start. We want our back-to-back championship,” said a confident Rico Black. 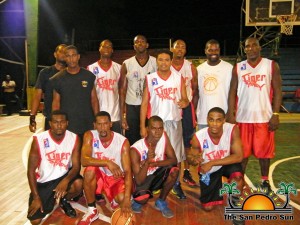 The team will travel back to the Belize City on Friday June 28th and July 5th for games two and three of the finals. Games are played at Birds Isle and they start at 9PM.