« Older: Kent Gabourel tops weekend cycling race
Newer: » The search is on to find The Queen’s Young Leaders of Belize 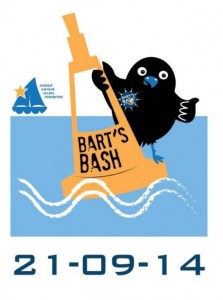 The San Pedro Racers (SPR) will be part of Bart’s Bash, a sailing race that will be simultaneously taking place in several destinations across the world. The event is scheduled to take place on Sunday, September 21st across 65 countries,and is expected to be the biggest sailing race yet. The aim of Bart’s Bash is to set a record in the Guinness Book of World Records, and to be the “Largest sailing event in the world”. Belize’s venues for the all-day event will be Caribbean Villas Hotel.
Bart’s Bash is hosted by the Andrew Simpson Sailing Foundation, a charity organization aimed to inspire the next generation of youth through sailing in the United Kingdom and around the world. As part of the event, sailing clubs from across the globe will race at their locations. At the end of the race, all sailors will receive an overall world rank according to their score in the race. So far, Bart’s Bash will see the participation of 10,796 sailors from 728 clubs. In addition to attempting to set a world record, the race will also serve as a fundraiser for the Andrew Simpson Sailing Foundation.
To learn more on the San Pedro leg of Bart’s Bash, contact SPR Commodore, Andrew Milner at 632-4101. To get full details and latest new on the event visit www.bartsbash.co.uk.

The Andrew Simpson Sailing Foundation is a charity set up in 2013 to honor the life and legacy of Andrew ‘Bart’ Simpson, Member of the Order of the British Empire, Olympic Gold & Silver medalist and America’s Cup Sailor, by using sailing to transform the lives of young people.Simpson won a gold medal at the 2008 Summer Olympics in Beijing, China, as crew for skipper Iain Percy in the Star class representing Great Britain. Simpson was killed when a catamaran capsized on 9 May, 2013, while training for the America’s Cup in San Francisco Bay, USA.