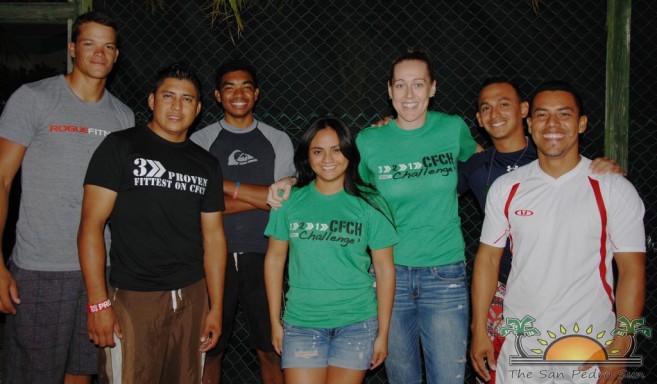 Competitors from Sun and Sand CrossFit included James Sanchez, Ernie Longsworth, Alex Garcia, Jennifer Maher and Chandel Rodriguez. CrossFitCFS competitors were Freddy Gonzalez and Gian Rivero. The two-day event included three workout events per day, and saw both males and females competing in intermediate and advanced divisions. While none of the San Pedro athletes competed in the advanced category, each worked hard in gaining a place in the intermediate finals.

While the weight quantities varied between the male and female competitors, activities were the same. Workout regimes consisted of increasing sets in timed-activities such as: back squats, overhead squats, hang cleans, pull-ups, burpees, kettle bell swings/ thrusts, 1,000 meter runs, and deadlifts. At the end of the qualifiers on day two, the top five female and top ten male athletes were selected to compete in the final event. This selection saw Sun and Sand athletes Jennifer Maher and Chandel Rodriguez going on to compete in the female intermediate finals. Alex Garcia of Sun and Sand CrossFit and Freddy Gonzalez and Gian Rivero of CrossFitCFS made it to the male intermediate finals.

The final event was a 22 minute workout and included increasing sets of deadlifts, 20 inch box jumps, kettle bell swings, pull-ups, full squats and toes to bar. At the end of the intense routine, cumulative scores saw Chandel Rodriguez and Jennifer Maher claiming fourth place in the female finals and Alex Garcia making his mark in Chetumal and claiming 3rd place on the podium. Garcia was awarded a prize of CrossFit Chetumal Challenge Shirts, protein supplements, recovery drinks, and souvenirs. Gian Rivero proudly placed in the top 10 as well. While Freddy suffered an injury during the qualifiers, he still managed to power through two of the three events in the finals, only stopping at his coaches’ and organizers’ insistence to prevent further injury. Despite being unable to finish the last event, he still placed in the top ten as well!

Members of Sun and Sand CrossFit thank Coach Lucien Pollard and assistant Jody Leslie for their continued support and dedication in preparing each competitor for the challenge. Athlete Jennifer Maher extends much gratitude to The Phoenix Resort for allowing time off to compete and for their support in healthy living by covering gym membership fees.

The San Pedro Sun congratulates Alex Garcia for his third place win, and we applaud all the athletes that gave their all in this event. We hear there’s buzz about next year’s challenge, and we’ll be looking forward to those results!