Over 100 athletes of all ages came out on Sunday, May 31st to participate in the 2015 Olympic Day Run. Hosted by the Belize Olympic and Commonwealth Games Association (BOCGA) and held under the auspices of the International Olympic Committee and the Belize Olympic Committee, the event celebrates the anniversary of the Olympic Movement. Similar runs are held across the world in a show of solidarity under the theme “Move, Learn and Discover”. Among the runners were island athletes Eric Donis and Kent “Bob” Gabourel who placed second and third, respectively, in the Open category. Taking first place was Albert Davis. 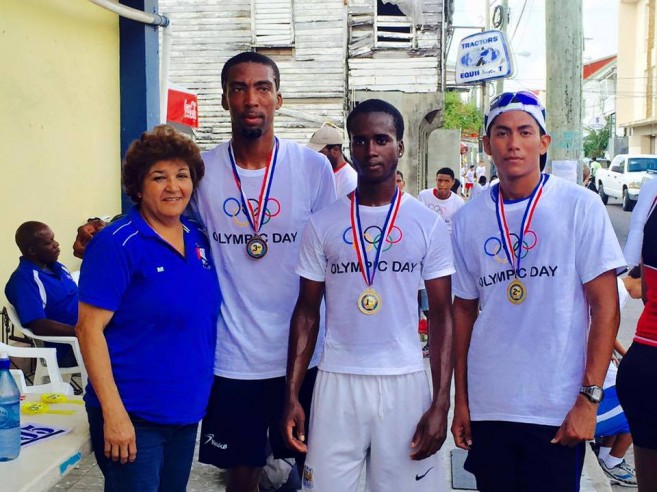 The race kicked off at 6:30AM on Regent Street in Belize City and was divided into four categories: Infants (nine and under), Juveniles (10-13 years), Juniors (14-19 years) and Open/Masters (22 and older). Certificates were given to all participants in recognition of their performance, while winners received ribbons and medals. General Secretary of BOCGA Yolanda Fonseca explained the day’s events. “The Olympic Day Run commemorates the actual movement of the Olympic Games. But it is more than commemorating the day, it is the actual awakening of the people. Belize participated in the first Olympic Games in 1968 and since then, we have been attending consistently to the games and participating. We have even gotten to the point our athletes have reached the qualifying standards to participate. Now the purpose of this Olympic Day Run was to enlarge the scope of athletics. We are concentrating on the portion of moving, which is being active, we have people who are moving… which helps with health. It even helps with the environment, because the area where they run is sufficiently prepared for them to run freely. The run covers different scopes, even education. Really and truly, sports is something that helps students in keeping the mind alert. For that reason, we extended the invitation to all the members of our community to run and be a part of this great event. We came together to bond in sports and it will become a societal thing where all aspects of life are covered.”
The San Pedro Sun congratulates Gabourel and Donis on an excellent race. Kudus to all who came out and supported the Olympic Movement!