The Island Citizen Sporting Club (ICSC) and San Pedro High School (SPHS) Five-a-side Football Tournament is coming to close with only the semi-finals and championship matches left to be played. The quarter finals saw more teams being eliminated and the possible champions winning a slot in the semi-finals. Large crowds of football fanatics came out in full force to the Angel Nuñez Auditorium to support their favorite teams. 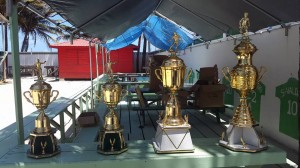 As always, the week’s games kicked off on Thursday, August 13th with three little league, one female and two senior matches. In the first match of the night, the Under 10 teams of United FC and Barcelona FC faced off. It was a tight match but Barcelona FC managed to take the win in a 4-3 point game. In the second match FC America Under 10 defeated FC Bayern Munich Under 10 in a 3-2 point game. The final little league match was between Manchester United FC Under 13 and Chelsea FC Under 13. This match ended in 4-2 point win for Cheese FC.In the female match, Barrier Reef Girls defeated Hyde’s Strikers in a 7-1 point game. Playing in the fifth game of the night were Los Catrachos FC and Belize Pro Dive Center FC. But teams wanted the win but it was Los Catrachos who took the victory in a 6-3 point game. The last game end in a 2-2 tie between Varela’s Boys and United FC.
Games continued on Friday, August 14th with four matches. In the first match Barcelona FC Under 13 defeated Inter De Milan FC Under 13 in a 4-3 point game. Next up was the matchup between Blue Ocean Sands FC and Ernie’s Striker FC. It was tight match but Ernie’s Strikers FF edged out their competition and took the match in a 5-3 point game. Island Pure Fc took on Green House FC in the third match of the night. The game ended in a 6-4 point win for Island Pure FC. Raven’s FC defeated Sandy Point FC in the last match of the night in a 4-3 point game.
Saturday, August 15th saw the second round of the matches played on Thursday. The match between United FC Under 10 and Barcelona FC Under 10 ended in a 3-3 tie, while match between FC America Under 10 and FC Bayern Munich Under 10 ended 2-1 win for FC Bayern Munich. The Under 13 match between Manchester United FC and Chelsea FC ended in a 6-3 point win for Chelsea FC. The win for the female match of the night went to Barrier Reef Girls who defeated Hyde’s Strikers FC in a 1-0 point game. Los Catrachos FC won their second match against Belize Pro Dive Center FC in a 9-1 point game, while Varela’s Boys won their match against United FC in a 2-1 point game.
Similar to Saturday, Sunday August 16th saw the second round pf the matches played on Friday. In the little league division, Barcelona FC Under 13 tied 1-1 in their match against Inter De Milan FC Under 13. Blue Ocean Sands FC won their match against Ernie’s Striker FC in a 3-0 point game. While in the senior division, Green House FC defeated Island Pure FC in a 3-1 point game and Raven’s FC defeated Sandy Point FC in a 3-1 point game.
With the quarter finals over, organizers tallied the points announcing the teams that would be competing in semi-finals and finals. Heading to the finals in the Under 13 division are Barcelona FC and Chelsea FC, while Barcelona FC and FC Bayern Munich will face off in the Under 10 finals. In the female division, Barrier Reef Girls will face off Blue Ocean Sand in the championship match.
The senior teams will still play one more round of game to decide the two teams facing off in the championship match. The four advancing teams are: Los Catrachos FC, Varela’s Boys, Green House FC and Raven’s FC.
The next round of games will take place from Thursday, August 20th to Sunday, August 23rd. The schedule is as follows:

Organizers have also announced that there will be a male senior marathon on Saturday, August 22nd starting at 6PM. Eliminated teams will have a chance to win a cash prize of $250. You definitely don’t want to miss out on these games as the promise to be very exciting.