The Island Citizen Sporting Club (ICSC) and San Pedro High School (SPHS) Five-a-side Football Tournament has come to a most exciting end. The quarter finals took place from Thursday, August 13th to Sunday, August 16th and saw more teams being eliminated, with possible champions winning a spot in the semi-finals. But the excitement really ramped up from Thursday, August 20th to Sunday, August 23rd during the final week of games. Large crowds of football fanatics came out in full force to the Angel Nuñez Auditorium to support their favorite teams. In the end, the four teams that rose as champions in each of the divisions were FC Bayer Munich Under 10, and Los Catrachos FC.

Thursday, August 13th saw three little league, one female and two senior matches. In the first match of the night, the Under 10 teams of United FC and Barcelona FC faced off. It was a tight match but Barcelona FC managed to take the win in a 4-3 point game. In the second match FC America Under 10 defeated FC Bayern Munich Under 10 in a 3-2 point game. The final little league match was between Manchester United FC Under 13 and Chelsea FC Under 13. This match ended in 4-2 point win for Chelsea FC. In the female match, Barrier Reef Girls defeated Hyde’s Strikers in a 7-1 point game. Playing in the fifth game of the night were Los Catrachos FC and Belize Pro Dive Center FC. Both teams wanted the win, but it was Los Catrachos who took the victory in a 6-3 point game. The last game end in a 2-2 tie between Varela’s Boys and United FC.

Quarter finals games continued on Friday, August 14th with four matches. In the first match Barcelona FC Under 13 defeated Inter De Milan FC Under 13 in a 4-3 point game, while Blue Ocean Sands FC faced Ernie’s Striker FC losing in a 5-3 point game. Island Pure FC outscored Green House FC in the third match of the night, ending with in a 6-4 point win. Raven’s FC defeated Sandy Point FC in the last match of the night in a 4-3 point game.

Saturday, August 15th saw the second round of the matches played on Thursday. The match between United FC Under 10 and Barcelona FC Under 10 ended in a 3-3 tie, while the match between FC America Under 10 and FC Bayern Munich Under 10 ended in a 2-1 win for FC Bayern Munich. The Under 13 match between Manchester United FC and Chelsea FC ended in a 6-3 point win for Chelsea FC. The win for the female match of the night went to Barrier Reef Girls, who defeated Hyde’s Strikers FC in a 1-0 point game. Los Catrachos FC won their second match against Belize Pro Dive Center FC in a 9-1 point game, while Varela’s Boys won their match against United FC in a 2-1 point game.

Similar to Saturday, Sunday August 16th saw the second round of the matches played on Friday. In the little league division, Barcelona FC Under 13 tied 1-1 in their match against Inter De Milan FC Under 13. Blue Ocean Sands FC won their match against Ernie’s Strikers FC in a 3-0 point game. While in the senior division, Green House FC defeated Island Pure FC in a 3-1 point game and Raven’s FC defeated Sandy Point FC in a 3-1 point game.

With the quarter finals over, organizers tallied the points announcing the teams that would be competing in semi-finals and finals. Heading to the finals in the Under 13 division were Barcelona FC and Chelsea FC, while Barcelona FC and FC Bayern Munich will face off in the Under 10 finals. In the female division, Barrier Reef Girls will face off Blue Ocean Sands in the championship match. The senior teams had to play one more round of games to decide the two teams facing off in the championship match, with the four advancing teams being: Los Catrachos FC, Varela’s Boys, Green House FC and Raven’s FC. 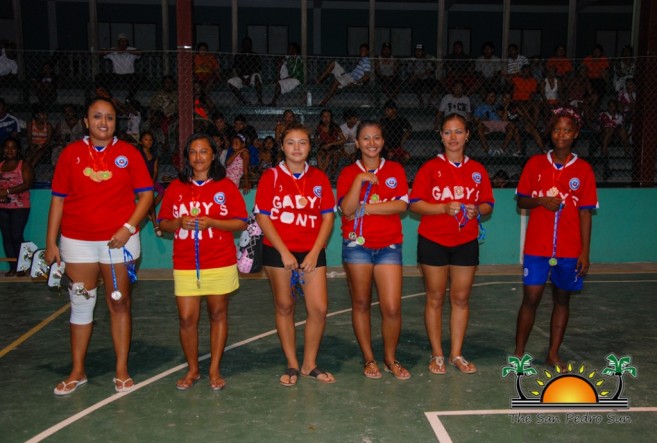 The finals started bright and early on Sunday, August 23rd with the first match being played at 11AM. The first four sets of matches were to determine the third and fourth place for each division. United FC Under 10 took on FC America in the first. The match ended in 9-4 point win for FC America, allowing them to take the third place trophy and prizes. Scoring for the winning team were Steven Almendarez with four goals, Logan Espat with four goals and Joecel Liandre Bulnez with one goal. In the Under 13 division, Manchester United FC faced off against Inter de Milan FC. Taking the third place trophy and prizes in this division was Manchester United FC who defeated Inter de Milan FC in a 3-2 point game. The next match was between the female teams of Ernie’s Warriors and Hyde’s Strikers. Ernie’s Warriors took the third place trophy and prizes through a win by default as Hyde’s Strikers were a no show. Green House FC rose as the third place champions in the senior division after defeating Varela’s Boys in an 8-5 point game. Scoring for Green House Fc were Harbin Velasquez with three goals, Jesus Lizano with two goal, Dinho Noralez with two goals and Pedro Tzul with one goal.

With the third place champions decided, it was time for the main event: the four champion matchups! First to face off were FC Bayern Munich Under 10 and Barcelona FC Under 10. The game ended in 4-0 point win for FC Bayern Munich, making them the Under 10 Champions. Scoring for the winning team were Eduardo Reyes and Kylen Castillo with two goals each. The Under 13 Champions are Chelsea FC after they defeated Barcelona FC in a 4-2 point game. Franklin Oliva (1 goal), Christian Medina (2 goals) and Luis Hyde (1 goal) scored the winning goals for Chelsea FC.

The female championship match was an exciting one as two power houses faced off. Blue Ocean Sands faced off Barrier Reef Girls in a tight match. In the end, the win and the Female Championship trophy and prizes went to Blue Ocean Sands who defeated Barrier Reef Girls in a 3-2 point game. Scoring for the winning team were Ester Galeano with one goal and Ada Cordova with two goals.
The last game, and most anticipated, saw the two top senior teams facing off. This was a grueling match between Los Catrachos FC and Raven’s FC. Both teams wanted the win but it was Los Catrachos who out edged their compettion taking the game in a 3-2 point game. Raven’s FC had to settle for the second palace trophy and prizes, while Los Catrachos walked away with the grand first place trophy and prizes. Scoring for Los Catrachos were Nestor Cerpa, Jesse Smith and Joshua Craft.

Tiger Sharks suffer their first loss in the 2017 NEBL season