The 6-A-Side Interoffice Football Tournament came to an end on Saturday, October 1st , with three sets of games at the Honourable Louis Sylvester Sports Complex. The evening saw matches in the junior and senior category, culminating with the anticipated match for the tournament’s championship between Rain and Victoria House. After an intense match, Team Victoria House, with a final score of 2-1, was crowned the 2016 Champion of the Interoffice Football League.

The first set of games in the Junior Category started shortly after 6:30PM, between PSG and Bayern Munich. During the entire 40 minutes, PSG dominated the game and walked away with the victory in a 4-3 point game.

Immediately after, the match for third place in the senior category took place between Mambo Boys and Costa Boys. Both teams gave their all, and in the final minutes, the game was tied 3-3. Then from the left corner of the field, came a centred ball that ended up in the net. Mambo Boys moved ahead, and very strategically kept that score until the end of the game claiming the third place. 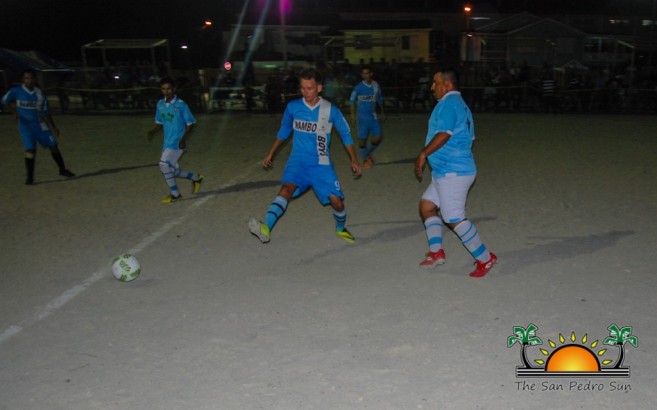 Around 8:30PM, the sporting arena was packed with football fans eager to see the championship match. The battle for the first place between Rain and Victoria House kicked off, and the cheers turned to loud roars. Victoria House was the first to score ten minutes in to the first half. Despite several attempts from Rain to even the score, the first half finished with Victoria House in the lead. During intermission, the spectators were treated to a dance performance by a group of talented dancers from Benque Viejo del Carmen.

The second half of the game got even more intense, as Rain managed to even the score. In the last few minutes of the match, however, Victoria House shot a deadly ball straight into the net. Once again, they took the lead to the delight of their fans. Coaches strategized with their teams to make every minute on the field count. Rain made several close attempts to score, but the ball just could not find its way between the goal ports. Victoria House thus emerged as the 2016 champion, with players and their fans celebrating their victory joyously.

Before the winning teams could receive their trophies, individual awards were handed out, after which Mayor Daniel Guerrero delivered a few words. He commended all the teams and everyone who made the tournament possible. He added that The San Pedro Town Council will always support sports and that more sporting events are coming in the future.

Each team was then called up accordingly and presented with their trophies. In third place was Mambo Boys sponsored by Mata Chica Resort. Second place went to Rain, who graciously accepted their second place trophy. Taking the first place trophy was the winning team of Victoria House who once again celebrated with their fans.

The San Pedro Sun joins the community in congratulating Victoria House as the 2016 Champions of the 6-A-Side Interoffice Football Tournament.