The Ambergris Stadium has been in construction for more than a year, and is now undergoing its finishing touches. Belize Infrastructure Limited (BIL) General Manager Christy Mastry has confirmed to The San Pedro Sun that the stadium should be completed either by the end of November or the first week of December. Highly anticipated by sporting enthusiasts, the renowned stadium is expected to transform sports professionalism on the island.

Initially, Mastry told The San Pedro Sun in her last interview that the inauguration ceremony of the stadium was set to take place in September 2016. However, due to certain setbacks pertaining to the installation of lighting, the completion date has changed. “We are looking at the end of November or early December. It is always hard to predict a certain date, especially when we are dependent on utility companies and other issues. However, this is our final target goal. The stadium is nearing its final completion,” explained Mastry.
At the moment, the civil workers are placing roofs onto the VIP lounge, installing glass windows and finishing both locker and restroom facilities. In addition, Mastry stated that the parking lot area, and sidewalk is being cast and should be completed by next week.
Many concerned individuals have questioned what caused the delay of the $2.3 million dollar project, and Mastry says that the project has been in accordance to their timeline frame. “There hasn’t been many delays. The real setback was caused by the decision to install synthetic turf. The team had to do a lot more civil work such as filling, grading, trenching, and installing the underground drainage system. So the team dedicated two months to installing the turf, which is a lot more labor intensive. After we got the turf in place, the workers were able to get back to construction,” said Mastry.
However, Mastry stated that that powering up a new site is always a challenge with utility companies. She says that the biggest task to achieve in the upcoming weeks is to install lighting at the stadium. “We want to power up those big lights, and Belize Electricity Limited (BEL) has committed to try and assist us. We have our electrical supplies, but BEL needs to bring in transformers. However, they need to be present to inspect the trenching, but they somehow cannot find the time to go out there. I understand them, and I realize that utility companies are helpful where they could be. Unfortunately, times were coordinated for us to meet, but sudden urgencies has made them unavailable,” said Mastry. 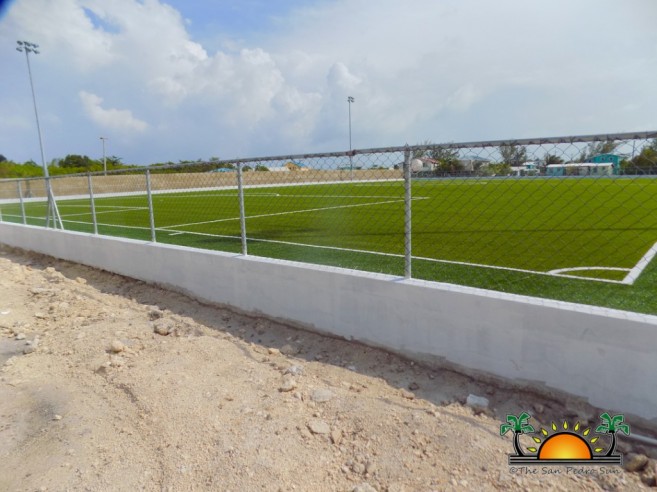 Since the start of rainy season, many individuals have asked whether or not the synthetic turf could sustain inclement weather condition. Mastry reiterates that the stadium’s turf does not have any issues retaining water. According to her, the synthetic turf has lasting effects compared to natural grass. “The turf is built to take rain, and it’s built to sustain water. The drainage system we have in place is to assure that we don’t flood. If it was natural grass, water puddles would have soaked the field and prevented players from using it,” said Mastry.
The San Pedro Town Council (SPTC) has worked alongside with Mastry, playing an active role in the progress of the stadium. Councilor and Sports Coordinator, Hector Alamilla, in charge of Culture, Youth, Sports, and Leisure activities, is more than ecstatic for the council to inaugurate the building, and is hoping for it to be a memorable experience.
According to Alamilla, the inauguration ceremony is scheduled for Saturday, November 26th, and the San Pedro Sports Committee (SPSC) is preparing for that special day. “The SPSC has organized three games, one being a Corozal Under 13 team to go against our Under 13 teams. Then, the San Pedro Veterans will be playing against Chetumal Veterans. Our stellar game will be our own San Pedro Football Club playing against a team all the way from Austin, Texas, USA, Real Chutemoc F.C.,” said Alamilla.
In the meantime, the SPSC has drafted a football team that will represent San Pedro, and they will play in Chetumal, Mexico this weekend against Primera Fuerza de Chetumal.