San Pedro Team Hook, Line & Sinker placed third at the annual Copa Gobernador Fishing Tournament held in Mahahual, Mexico. The annual two-day event took place on Saturday, May 6th and Sunday, May 7th, and tested the ability of some of the best fishermen in high-seas fishing. 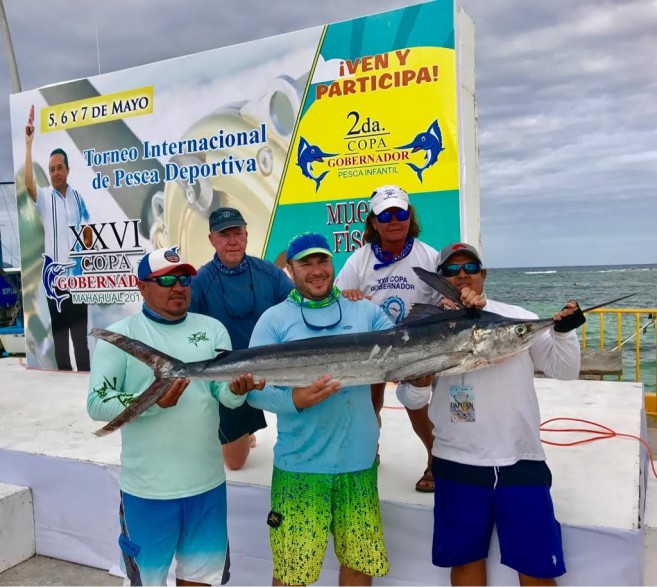 The island was represented by five teams, Seaduce, Arsenal, Freedom Tours, Reel Challenger and Hook Line and Sinker. Caye Caulker’s team Frenchies also joined in on the fun. Manned by Captain Kelly Hook, Line, and Sinker’s crew was comprised of Kim Kelly, Josue Reyes, Albie Godoy, and Hugo Meyer, who once again made the island proud with their impressive performance.
The winning island team captured a Dorado and a white Marlin, giving them a total of 1,720 points, and placing them in the top three at the tournament. According to Reyes, the competition was tough, as more than 20 vessels headed out to sea in search of the big one. “The first day we captured a white Marlin of about 40 pounds,” said Reyes. “The second day we caught a Dorado of approximately 15 pounds.” According to Reyes, the team was just 10 pounds away from claiming the second place. As third place winners, the team took home a four-wheeler cycle.

The other top teams were team ‘Bad Boys’ from Chetumal, Mexico who captured first place and won a brand new vehicle, and second place team ‘Toledito,’who also took home a vehicle.
The Mexican press declared the Copa Gobernador Fishing Tournament 2017 an extremely successful fishing event. Organizers thanked all the sponsors that once again made the event possible and all the participating teams for their passion and support of the fishing sport. They look forward for another memorable competition next year and encourage all the fishermen to continue participating in the upcoming fishing tournaments taking place throughout the year.
The San Pedro Sun congratulates team ‘Hook, Line and Sinker’ for their excellent performance at the Copa Gobernador Fishing Tournament.