Saturday, November 3rd, 2018, on a slightly overcast day an excited crowd of curious spectators gathered to witness a historic event. While everybody in Ladyville is familiar with the British troops and their sporting prowess, nobody knew quite what to expect as cars, pick-ups and minibuses from the BATSUB Base and across Belize arrived with gangs of young lads jumping out wearing bright colored kit and carrying what looked like American Footballs.

But it wasn’t American Football. This was rugby 7s, a hugely popular variant of rugby players around the world. And the lads were from some of Belize’s first rugby football clubs – Kings Park Scorpions RFC, Cayo Baymen RFC, Orange Walk Black Mambas RFC, and the first ever national rugby team of Belize – The Belize Macaws.
At the 1pm kick-off, Cayo Baymen RFC, the newest team to be established in Belize from San Ignacio, took on BATSUB Sailfish RFC. It was a nervous, tough first game between a Belizean team and the experienced BATSUB boys, but, under the hugely experienced direction of Referee, Scott Harland from Rugby Americas North (the regional rugby governing body) who was also running a match officials training course on the day for four new referees, the game soon thrilled the record number of spectators for a rugby game here in Belize. 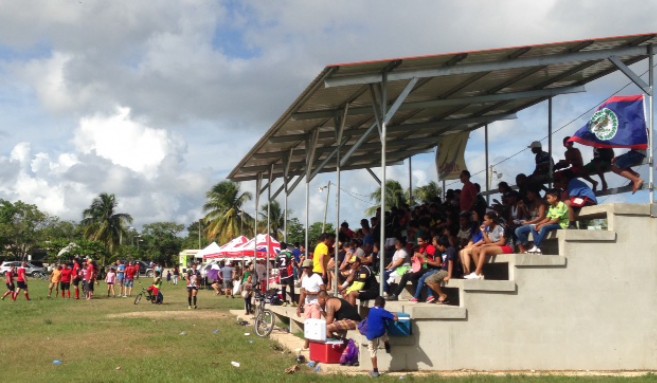 Packed bleaches and crowded tents at the Ladyville Sports Field

After 16 minutes (the game is played over two 7 minute halves with a 2-minute break), the game was over and BATSUB took the win. Next came the Scorpions versus Black Mambas – Belize City against Orange Walk. The two top teams in Belize. The Mambas won after a tough game in which the only yellow card of the day was issued, for a high tackle, leaving Scorpions one man down for 2 minutes of the game. Then came the main event – Belize national team versus BATSUB. This would be the first game for the recently-established national team, and it was an absolute thriller! The Macaws scored two tries in the first half against the Sailfish, including a great sprint from Macaw’s Ashton Usher, and another dash for the line from Jason Castillo. A daring tackle from Macaws’ Jonathan Smith, to thunderous applause from the spectators, prevented the Sailfish from getting the fourth try, but they won eventually 3:2.

Local youngsters meeting and playing with members of the Belize National Team.

After ten games of thrilling rugby, with each of the Belizean teams playing each other and BATSUB, the event closed (well, the beer ran out as well), but not before some youngsters who were in the crowd and from around Ladyville, who had been anxiously waiting to try out this new sport, got the chance to play with some members of both the National Team and BATSUB. Each time there was a break in the rugby games, these youngsters would come out onto the field and practice throwing the ball around – it was difficult at times to keep them off the field, so when the chance came to play with real rugbiers, they were quick to jump in.
The next game involving all the Belizean teams from Belize City, San Ignacio, Belmopan, Orange Walk and San Pedro will be the National Championships in Belize City, on November 25th, 2018. On that day the first ever international rugby match – between Belize and Guatemala – will also take place.