The San Pedro High School Sharks lost three-four to the Corozal Community College girls in a penalty shootout in the championship final. Tanya Teul and Keila Lezema led the Sharks’ offensive, supported by Samira Sorto and Angel Garnett on the wings and by Normalee Gomez and Dulce Leiva at midfield. But the CCC defenders Xena Loza, Marcia Ara. Ashari Zuniga and Keah Canelo helped goalkeeper Andrea Campos hold them at bay until the end of regulation.

The Sharks’ staunch defenders Babee Lopez, Vatranny Perez, Jairy Acosta, and Mailin Garcia helped goalie Denissa Mairena shut out the best efforts of CCC’s strikers Darina Tzul and Yasmine Diaz to get a goal. CCC’s midfielders were similarly frustrated by a nil zip draw at the end of overtime.
The Sharks refreshed their attack formation with Lincy Romero, Glevy Mejia, and Jasmine Vides replacing Garnett, Perez, and Babee Lopez but it came down to penalties.

The Sharks’ Keila Lezama, Jairy Acosta, and Normalee Gomez all scored their penalties past CCC’s goalie Andrea Campos, but CCC’s Anahie Blanco Yasmine Diaz, Darina Tzul and Ashari Zuniga also converted their penalties. Campos in goal stopped the Sharks’ first and fifth attempts to secure the four-three win.
In game One of the morning, the Sharks advanced to the finals by a 3-0 win against the Belize High School of Agriculture girls, with Tanya Teul, Normalee Gomez and Keila Lezama scoring a goal apiece.
In game Two of the day, the San Pedro High School boys lost 1-0 to the defending national champions, the Orange Walk Technical High School boys, when Tyrese Augustine scored the winning goal past goalie Zahir Sandoval. SPHS Jerson Betancourt, Jarrett Rubio, Jenry Gonzalez led the counterattack, with the help of midfielders Ronier Santos, Michael Rodriguez, and Jahleel Noralez; but to no avail. SPHS Justin Williams, Jose Valle, Shawn Sho and Leroy Arzu locked off the defense to concede no more goals, but the OWTHS boys moved on to the finals by the 1-0 win.

The Belize High School of Agriculture boys won the championship 2-1 against the OWTHS boys, so it will be the CCC girls and the BHSA boys representing the North at the National Secondary Schools Sports Association (NSSSA) football championships at the Marion Jones Sports Complex in Belize City on February 14-15. 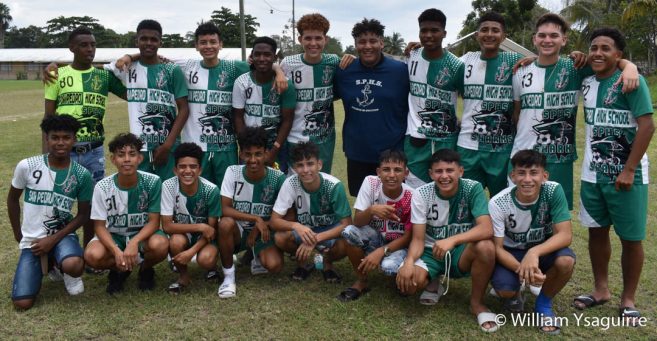 The SPHS boys won third place by goal differential, as they had only conceded one goal, while Escuela Secundaria Tecnica Mexico had received three goals from the BHSA boys. The SPHS girls received the second-place team trophy, while the SPHS boys were awarded the third-place trophy and individual medals from the NSSSA executive committee in the awards ceremony after the finals. CCC’s Andrea Campos and BHSA’s Zamir Bonilla received the Most Valuable Player awards.