At this year’s Women Day on Sunday, March 8th, islander marathoner Ian ‘Lion’ Gordon was in the city of Cancun, Mexico, competing at the ‘Maraton de la Mujer,’ where he once again proudly represented Belize. A day after, he was back in Belize, where he claimed first place at a five-kilometer run in his age- range (40-49) and third place overall. Gordon is now preparing to compete at another half marathon set for Sunday, March 15th, at the Chiquibul National Park area in the Cayo District. 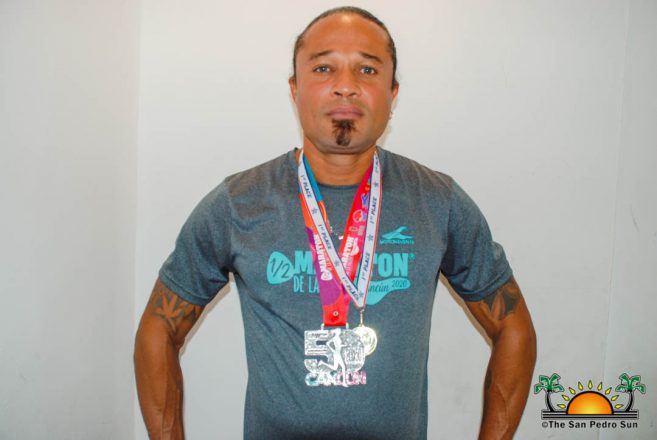 Gordon competed among thousands of athletes in Cancun, including thousands of women, who took the challenge of the 13.1-mile marathon. The Belizean marathoner stated that the run had its challenges. “It was a windy day, so when you would be running against the breeze, the run became harder,” said Gordon. He pressed on hard and successfully completed the marathon. In the end, he collected a medal to add another proud symbol to his sporting career.
The following day on Monday, March 9th, he was in Orange Walk Town, where he completed a 5k run. He excelled in his age-range category and took third place overall. Gordon is not taking much of a break, gearing up to run in the mountain-range of the Chiquibul National Park. He says that preparing for this half marathon is mainly mental. The terrain is steep, which makes it very challenging for anyone competing in a mountainous environment. Gordon says this is the second time running at the Chiquibul half marathon, and he is ready for his third within a week.
Gordon is well-known for his running skills in San Pedro Town, and he has participated in several local and international marathons. His main goal is to compete in the 2024 Olympic Games to be held in Paris, France. He hopes to inspire and encourage those people who think that they are too old to accomplish their dreams.