After it was declared by the Ministry of Health and Wellness that contact sports would be allowed under the condition that every player is vaccinated against COVID-19, the Football Federation of Belize (FFB) announced on Monday, October 18th the beginning of the FFB Top League Tournament 2021-2022. The national football competition is set to start on Saturday, October 23rd with the participation of the following football clubs- San Pedro Pirates FC, Altitude FC, Caesar Ridge FC, Garden City FC, Verdes FC, and Wagiya SC. 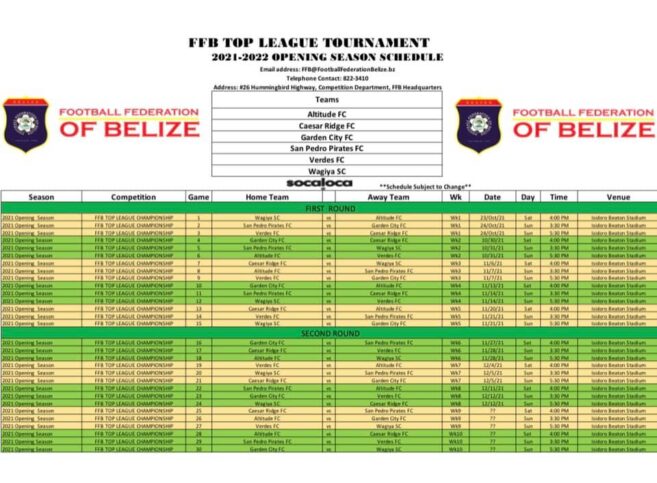 Other clubs were interested in participating, but according to FFB, only the ones mentioned above were successful in meeting all the requirements established by the federation. The FFB Top League was put in place by the federation because the Premier League of Belize (PLB) is currently subject to restrictions mandated by the Supreme Court of Belize. In April of this year, a Supreme Court injunction stopped the PLB from proceeding with an electoral congress. PLB’s duly elected Executive Committee secured the injunction to stop the football group under the reportedly illegal leadership of Ian Haylock to hold an Electoral Congress.

FFB says that their goal is to fulfill the requirement of FIFA for the restart of football in Belize and to protect the participating berth accorded for the FFB for the CONCACAF tournament. The FFB hopes they only oversee the aspects of the tournament for the period 2021-2022. It is expected that by then, the PLB would have resolved their legal matters.

The San Pedro Pirates have been training for their first match on Sunday, October 24th against Belmopan’s Garden City FC. The match is set to start at 3:30PM at the Isidoro Beaton Stadium in the Capital City of Belmopan.

The FFB thanks the Ministry of Sports and E-Governance and the Ministry of Health and Wellness for their partnership and chartering the way forward for the return of football in Belize. This move is approved by UNCAF, CONCACAF, and FIFA.