SPTC and Police “tighten up” in enforcing traffic and bicycle laws 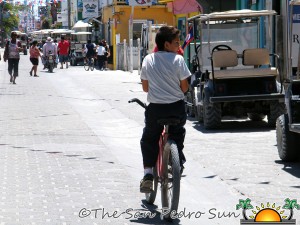 Both the San Pedro Town Council (SPTC) and the San Pedro Police Department are in full operation enforcing traffic laws as it relates to parking on public roads, drinking and driving and ensuring that bicycles are properly equipped as mandated by law. The enforcement of the laws took many by surprise and sent some affected motorists unhappy to say the least.

Local residents and a few tourists informed The San Pedro Sun that they were unaware of the parking regulations as they relate to a section of Coconut Drive. Apparently several people were ticketed while parked on the west side of the road and they were surprised since they had never been informed about the regulation as it relates to parking on Coconut Drive, nor are there signs indicating that it is prohibited to park on the western side of that street. But according to the head of the San Pedro Transport Department Chris Nuñez, the law, which was gazette over eight months ago clearly relates to parking on streets in San Pedro Town. Nuñez explained that all motor vehicle should park on the side of the road that has the sidewalk. When there are no sidewalks on the street, Nuñez explained that there are signs indicating “no parking” areas. Speaking on the issue of the lack of signs to clearly indicate parking from no parking areas, Nuñez said that, “we know that we have a lack of signs and the department is in the process of getting more signs to place in different parts of the town. While we are not required to give warnings to motorists prior to issuing a ticket, out of courtesy we still give warnings before we charge the motorist with an offence.” Nunez said that the “tighten up” and enforcement of the law is largely due to the increase of traffic officers from two to six. 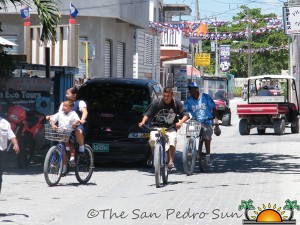 But the enforcement of parking laws by the traffic officers were not the only issue that has residents, especially bicycle owners, up in arms. The San Pedro Police Department also carried out their own enforcement of the bicycle law confiscating bikes that had malfunctioning brakes, no lights, lack reflectors and bells and were on public roads. Mayor of San Pedro Daniel Guerrero had indicated earlier this year of the council’s decision to implement the license of bikes as mandated by law. In speaking to The San Pedro Sun, Mayor Guerrero said that the decision to confiscate bikes that are “deem unfitted” to be used on “public streets” was a decision made by the police. What has upset affected residents is the fact that no prior notification was given. According to the San Pedro police department there is no need to warn anyone on the enforcement of bicycle law. “The law is specific when it comes to bicycles that should be on the road,” said the Officer in Charge and Assistant Superintendent of the Police Viennie Robinson of the San Pedro police department. According to the police, following the unexpected “sweep” over the past weekend, most of the people got back their bicycles except for those who could not show “proof of ownership.” Residents need to brace up as the police cautioned that they will continue to enforce and ensure that bicycles are “deem fit” to be on public road.

With the police stepping up their enforcement of traffic laws, they are also being more diligent in arresting drunken drivers. Drivers should know that once arrested for driving a motor vehicle (includes golf cart/motorcycle/bike) under the influence of alcohol, the driver will be detained until he or she is sober enough to have charges read to them. The police may also request of the driver to give a specimen (blood or urine), similar to the specimen collected when involved in a traffic accident, which will be sent to their laboratory to check for alcohol levels. Failure to cooperate with the police and voluntary give a specimen can lead to the being charged with the “failure to provide a specimen,” which upon summary conviction carries a $500 penalty and/or suspension of your driver’s license for a period not exceeding one year.

In closing, the Officer in Charge stated, “Residents should note that ignorance of the law is no excuse for breaking it, and they will be charged accordingly.”