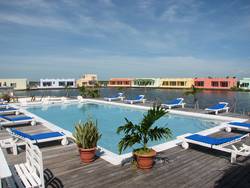 “A Strata Management Company has been registered with the Ministry and the process, as provided for within the Belize Strata Law, is advancing for the owner’s controlled Strata Corporation to run the management and maintenance of the resort and residential portion of the development. Any announcement would be premature before the Ministry has approved the Strata Application.”

To the rumour that RVR is in threat of liquidation and/or bankrupt, the response was “NO”. In responding to the question whether control of the entire RVR project was handed over to the Home Owners, Mr. Nitchmann informed,

“No. The Strata Committee has taken over the day-to- responsibility for the maintenance, landscaping and security. This is normal as we move forward to form the complete Home Owners Association”.

As to the extent of the debt owed by Reef Village to the various utility companies on the island, The Sun was informed,

“I am not privy to that information. It is a matter between the companies and the developer. Just as it would be between you and the utility company. However, I do know that the developer and the utilities are working as a team to clear any misunderstandings up”.

“Untrue, we have and have had electric power. Reef Village and BEL are working closely to upgrade the entire Reef Village electric grid and owe a great deal to BEL for their support of the community”.

In conclusion, Mr. Nitchmann stated that he sees the future of Reef Village to be a very thriving beautiful resort for all of the owners to enjoy as Mr. Pierce, the developer, envisioned.

On November 25, 2010, Volume 20, Issue #45 of The San Pedro Sun, we printed a story entitled “Sueño Del Mar closes – Timeshares Act put to the test.” Since the article was published, there have been many moves by investors to ensure that they regain what they feel is rightfully theirs: time and access to units they have paid for at Sueño Del Mar.

The property closed its doors in mid-September after falling into receivership. British Caribbean Bank (BCB) appointed Mark Hulse as receiver – and upon his appointment, the resort was closed, staff were let go, and owners of the units were told they could not enjoy their investment. Now it seems that Sueño Del Mar is operating as a hotel. A frustrated homeowner was told that

“operating the resort as a hotel is well within the banks rights […]” It is apparent Sueño has a license to operate as a hotel, and as such, reservations are being accepted for the summer season at “special rates for April 1, 2011 thru December14, 2011”.

It seems that all units are in the hotel pool of rooms, with prices starting at $99USD.

The questions remain: how did Sueño start operating as a hotel? Many interested parties would like to know how this affects their ongoing suit against BCB. Is the money generated from the rental of units as a hotel being used – at least in part – towards the amount Sueño Del Mar owes BCB? What are the legalities of renting out the units that technically – if the Timeshare Act is to be used as an argument – belong to the investors who bought time at Sueño Del Mar? These were just a few of the questions posed to Mark Hulse of Baker-Tilly Hulse (BTH). As of press time, no response of any kind has been received from BTH.

Sueño owners, however, have been very vocal about keeping readers informed as to the events at Sueño. An email was sent to The San Pedro Sun that outlines the efforts investors have gone to in trying to sort out the issues regarding their property. Below, find a copy of the letter:

“Dear Editor,154 of us have signed on as plaintiffs in a lawsuit against British Caribbean Bank (also known as Belize Bank) and its Receiver, currently operating Sueño to the exclusion of the membership. We are seeking to have the Timeshare Act upheld and the resort re-opened, so that all of Sueño ‘s members will have their rights restored and be able to return swiftly to Belize. We have been working on this matter for a long time, commencing last year when the Bank and Receiver closed the resort and then refused to recognize the membership. Our Sueño membership met in October and elected an informal advisory board. Since then, we have successfully petitioned the Government through the Belize Tourist Board, who subsequently issued a strongly worded legal opinion in support of the Timeshare Act and our position. We have also retained legal counsel to file and litigate our claim. The Bank is using its muscle in an apparent attempt to force the Sueño membership to pay off a bank loan that we had nothing to do with. It’s been a nine month attack by the Bank on the Timeshare Act. The Bank actions have seriously harmed the reputation of the tourist and visitor industry here in San Pedro as well. […] The law says one thing, but a project lender might behave otherwise.And the Bank has also harmed the local economy by kicking out Sueño members. By our calculation, the Sueño membership was spending in excess of $6 million BZ in the local San Pedro economy each year, supporting direct employment, restaurants and stores, tour guides and yes, even Belize Bank itself, where many accounts were kept. That is, until last September when the Bank unilaterally seized the resort and took away the home-away-from-home for so many of us. To all of our friends in San Pedro, thanks for your support and encouragement, and please be advised that we plan to win our case in court and be back with you soon./s/ David Cartwright3301 Camino Lisa (formerly Villa 11A at Sueño Del Mar)”

As more information comes to light, The San Pedro Sun will keep our readers informed.