There has been wide outrage from every corner in Belize after word broke loose that one of the four largest Maya ruins of northern Belize, thousands of years old, has been bulldozed for roadfill aggregate. The news first broke out on May 9th that the main structure at Noh Mul Maya site situated 10 miles northwest of Orange Walk Town was almost completely demolished. Since then the actions have received condemnation from various sectors of society calling on the Government of Belize (GOB) to bring those responsible to justice.

According to CTV 3 News based in Orange Walk Town, Noh Mul meaning Big Hat, was being demolished by construction company D Mar’s Construction Company who currently has government contracts to repair rural roads in both the Corozal and Orange Walk districts. According to reports, the material bulldozed by the company was being trucked to nearby Douglas village where the BC era Maya temple stones were being converged to hardcore for the rural roads. It’s an action that has archeologists in Belize at dismay at the level of ignorance displayed by the contractor who almost completely bulldozed a 20 meter structure considered to be thousands of years old.

“This is one of the largest buildings in Northern Belize. I am appalled! I was hoping that when I was driving up from the main San Juan road that it would not be this one but when I got closer I couldn’t believe it when I saw all the trucks. This is an incredible destruction… it’s monumental ignorance and unfortunately that’s the way it is. We always try to look at the positive side. Now we will probably have to look at this and say that it is a good example of what not to do,” described Dr. Allan Moore, Archaeologist at the Institute of Archaeology.

For archeologists, it undermines all of Belize’s patrimony, particularly for the Noh Mul site, one of the four major Maya sites in all of northern Belize from the pre-classic era. Archeologist Dr. John Morris of the Institute of Archaeology describes the destruction as “…one of the worst that I have seen in my entire 25 years of Archaeology in Belize. We can’t salvage what has happened out here – it is an incredible display of ignorance. I am appalled and don’t know what to say at this particular moment.”

Equally devastated by the destruction of Noh Mul is Dr. Jaime Awe, Director of the Institute of Archaeology. “The experience of having to see the images of the destruction at Noh Mul is in many ways probably one of the worst set of blows I have felt, philosophically and professionally…because what happened there is both deplorable and unforgivable. When one sees the heritage of our country being purposely destroyed for no good reason and particularly when people like myself or the other archeologists at NICH have spent our careers trying to protect and preserve this archeological heritage; to see it destroyed like that it is like when the boxer throws in the towel at the ring,” outlined a very disheartened Awe.

According to Awe, there was absolutely no way that someone could accidentally destroy the ruin, not knowing that it was a main Maya Site in northern Belize. “Noh Mul was and is certainly a well known site in Orange Walk. In fact, I don’t think any of the villagers in either San Pablo or San Jose, could say or would say that they are not familiar with this site. The destruction that occurred at Noh Mul was anything but accidental. I think that the people who went out there to start to destroy that temple, that pyramid, knew exactly what they were doing.” 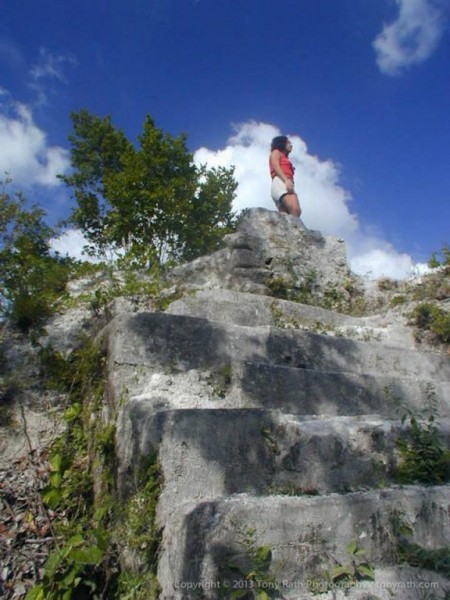 Not only are the archaeologists outraged but equally disgusted an appalled are various sectors of society. First to send out a release condemning the destruction of the mount was Citizens Organized for Liberty through Action (COLA). “We see it as obscene. You can’t use any other term to better describe it. This is obscene that someone could destroy a national monument; to do something like this is appalling and you are lost for words… Now this is total nonsense and it is unacceptable that the Belizean people have to stomach this sort of damage to our natural monument. This administration needs to be put into check when it comes to protecting our natural heritage. The question remains now; where is the Minister of Tourism? Where is he on the matter? Why hasn’t he put out a statement? Where is the B.T.B.? Where is the B.T.I.A.?” said Giovanni Brackett President of COLA in a media statement on Monday May 13th.

A release from People’s United Party called the demolition of the ancient Maya temples “deplorable” and adding that they “strongly condemn the destruction and plundering of the ancient Maya Temple, Noh Mul, and calls on the government to ensure that the perpetrators are brought to justice and that the full extent of the law is applied.” On Tuesday, May 14th, six days after the news was officially aired, the Belize Tourism Board and the Ministry of Tourism broke silence and issued a statement. The release said that the action “This [is] total disregard for Belize’s cultural heritage and national patrimony is callous, ignorant and unforgivable. The Ministry of Tourism and Culture, along with relevant agencies, has commissioned a vigorous investigation to determine all the facts in this case. Cultural landmarks such as Noh Mul are sacred artifacts of Belizean history and should be protected at all costs. This expressed disdain for our laws and policies is incomprehensible.” The Belize Tourism Industry Association (BTIA) also sent out a release expressing disappointment. “Such occurrences are simply unacceptable and should be prosecuted to the fullest extent of the law. It is also obvious that a concerted and sustained education and awareness building campaign is necessary in order to prevent the continued willful destruction of our cultural heritage.”

And while all corners of Belize society are expressing their disappointment with the actions done by D Mar’s Construction Company, owned by Orange Walk United Democratic Standard Bearer Denny Grijalva, they are equally disturbed by the fact that the material extracted is being used to fix roads in the Orange Walk North constituency. That is the constituency of the Deputy Prime Minister and Minister of Natural Resources and Agriculture Honorable Gaspar Vega. Late on Tuesday May 14th, a release from the Government Press Office stated that Minister Vega had no involvement in the destruction of Noh Mul’s main structure.

When questioned about the incident by CTV News on Sunday May 12th while campaigning during the Trial Farm Village Council Elections in the Orange Walk District, Prime Minster Dean Barrow responded that “I don’t know enough about that to comment.”

And while it is a major blow to the Barrow administration, Dr Awe stated that actions such as the destruction of Noh Mul make it difficult to obtain funding to help in conservation efforts in Belize. And while obtaining funding is one matter, what is of current importance is to bring those responsible to justice. “The next step is that the police are getting some more information on who is responsible; who the land owner is [the Maya site was on private property] and the purpose of that is to seek that this matter goes to court,” outlined Dr. Awe. “The reason is that it is against the law; it is against the nature act to willfully destroy an ancient monument, and the denature act. Any willful destruction of an ancient site or monument has penalties of ten years imprisonment or ten thousand dollars for this kind of destruction. So the matter will go to court and hopefully that litigation will come through.”

Of interest to note is that Noh Mul suffered a similar unfortunate incident in June of 1998. Then Orange Walk North UDP Standard Bearer Fred Martinez was caught up in the same situation – using one of the Noh Mul Mounds for road fill. Martinez lost the election but later became Belize’s Ambassador to Guatemala, a position that he has held on to for 13 uninterrupted years.

The event has garnered international attention and many international media houses have been reporting on the recent development at Noh Mul. However, works at the site has been halted and so far, Orange Walk Police has processed the site as part of the investigation. So far there has been no word from the police if any arrest has been made and what is the course of the investigation.

Wine De Vine hosts reading of “A Wager of Wills”