On Tuesday December 8th as announced earlier this year, Copa Airlines officially made their inaugural flight to Belize’s Phillip Goldson International Airport (PGIA). Copa Flight 281, travelling from Hub de las Americas Panama City, Panama landed on Belizean soil at 12:49PM carrying a total of 92 passengers. The flight was greeted by water salutes and an official inaugural ceremony. Present to witness the historic moment were Minister of Tourism and Civil Aviation, Manuel Heredia Jr.; Ambassador of Panama to Belize, Marta Irene Boza; Director of Sales for Copa Airlines, Adolfo Sen; Managing Director of the Belize Airport Concession and Co. Jorge Espat, Director of the Belize Tourism Board, Karen Bevans and a host of media and invited guests. 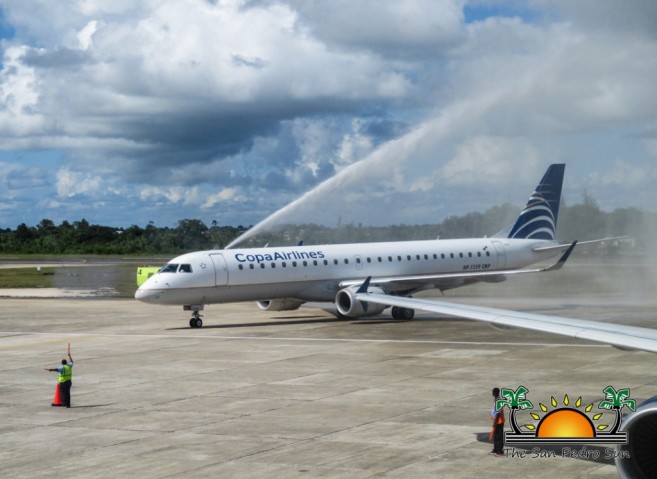 Now that the Panamanian airline is officially operational in Belize, passengers will have direct flight access to 75 cities and 31 countries in North, Central and South America and the Caribbean. Copa is offering two direct flights per week from Hub de las Americas (Panama City) to Belize’s PGIA.
“As of today passengers from Belize will be able to experience Copa Airline’s world class service, the best-time performance in Latin America, and one of the youngest and [most] modern fleets in the region. We are excited about Belize connecting to neighbouring [regional] countries such as Costa Rica; Bogota, Colombia; Santiago, Chile; Quito, Ecuador; Havana, Cuba; Santo Domingo, Dominican Republic; Lima, Peru; Port-of-Spain, Trinidad and Tobago; Managua, Nicaragua; and many other destinations with just one quick connection through the Hub de las Americas,” said Adolfo Sen. In closing, Sen went on to thank every partner that made the historic event possible. 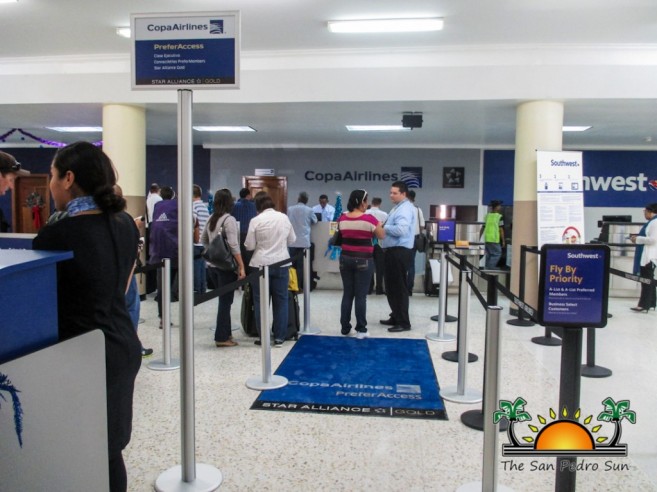 Minister Heredia stated, “We see the need to expand our reach southward and beyond. As a result, both Copa and Belize have partnered and committed to invest the time and resources that can serve as a catalyst to expand the five percent share that South America has in our tourism market, a market virtually untapped for Belize.” The Minister closed off the official ceremony by expressing his excitement for this development, and like Copa Marketing Director thanked all parties involved in bringing this plan to fruition.

Passengers departing Belize to Panama will be able to do so via Flight CM 281, which will leave Belize City on Tuesdays and Fridays at 2:17 P.M. and arrive at ‘Hub de las Americas’ at the Tocumen International Airport (Panama City) at 5:34 P.M. Return flights will leave Panama on Tuesdays and Fridays at 11:29 A.M. via Flight CM 280 which will arrive in Belize at 12:52P.M.