On Wednesday evening, November 16th, the San Pedro chapter of the Belize Tourism Industry Association (BTIA) held their annual general meeting at Fido’s Courtyard. In attendance were San Pedro BTIA Chairwoman Melanie Paz, BTIA National President John Burgos, representatives from the Ministry of Tourism and Belize Tourism Expo (BTEX), and members of the local chapter.
The San Pedro chapter was reformed in July 2015 after a couple years of inactivity, and since then has been working to represent the tourism stakeholders on the island. Of recent, efforts have been made to standardize taxi services in San Pedro, as they are considered island ‘ambassadors’; often giving the first impression to guests when arriving to the Caye.

At the general meeting Chairwoman Melanie Paz reported on the progress of this initiative, along with other efforts the chapter has tackled over the last year. “It has not been easy trying to organize the taxi associations, and gather their input on implementing a standardizing system. In general, just getting stakeholders interested in the San Pedro BTIA Chapter has had its challenges. It is so important that as a group we join forces in having a say in the direction tourism development goes here on the island,” Paz reported.
BTIA National President John Burgos was next to address the meeting, and reiterated the importance of representation of tourism stakeholders on the island. “As the #1 tourism destination in the country, stakeholders on Ambergris Caye can make a difference as a united group. The larger the group, the louder the voice. The BTIA monitors government tourism-based decisions, as well as the Belize Tourism Board (BTB). San Pedro should have the largest chapter in the country, there are so many issues our industry needs to be aware of, and together we can influence the outcome.” Burgos went on to outline the many initiatives BTIA is currently involved with, including developing on-site hospitality training, providing digital and social media workshops for local chapters, marketing through the Destination Belize publication and BTEX, organizing familiarization ‘fam’ trips for stakeholders, redesigning the BTIA website, updating tour operator and guide training programs, and surveying BTIA members for constructive feedback, to name a few. “The BTIA will also be joining forces with the Belize Chamber of Commerce, which is one of the largest advocacy groups in the country. Together we will have a [loud] voice.” Burgos concluded.
Following the BTIA President’s report, Tourism Officers Eddie Herrera and Alexia Peralta from the Ministry of Tourism introduced themselves to the group. Herrera stated that the Ministry of Tourism has a very good relationship with the BTIA, and that the Officers are here to listen to any concerns the stakeholders in San Pedro may have. Peralta reported that the Ministry will be reviewing the National Tourism Policy, and as the top destination in the country, they will be conducting interviews with stakeholders on the island. Gale Malic-Ozeata from BTEX was next to take the floor, and she informed the group about the plans for the Belize Tourism Expo 2017, which will be held on May 3 – 5, 2017 in Belize City. The two-day trade exhibition is an exclusive opportunity for international travel resellers to meet, network, negotiate and conduct business with local travel suppliers, learn more about Belize, and experience the destination firsthand. 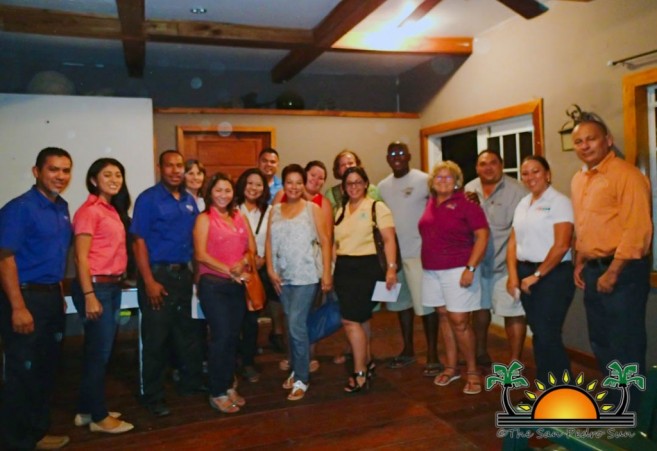 Finalizing the meeting involved the election of new board members for the San Pedro chapter. Tamara Sniffin was elected the Chairwoman, Melanie Paz the Vice-Chair, along with Delsie Graniel and a representative from the San Pedro Tour Operator Association, to be appointed at a later date. Chairwoman elect Sniffin stated, “So often I hear of tourism stakeholders here on the island who are frustrated with the direction the Ministry of Tourism and the Belize Tourism Board is taking. As the #1 destination in Belize, the stakeholders on Ambergris Caye need to work together for the representation we need, and deserve. We CAN be part of the direction our island takes, and we need to assure that what we give to the GOB, we get back. It can’t be done by just complaining about it, we need to join forces and work together to improve and protect the tourism product on the island. I’m excited to work with our chapter members and the board in making some positive changes here on the island. I encourage stakeholders to join our chapter if they don’t already belong. We are all in this together.”
The Belize Tourism Industry Association invites all its members and potential members to join them on December 1st at the Best Western Belize Biltmore Plaza in Belize City to celebrate their 31st Annual General Meeting. For more information on how to become a San Pedro BTIA member please contact Talia Tillett at [email protected]

BTB reports a Positive Increase in the Tourism Industry

New Xunantunich Ferry On the Horizon