The Countdown has begun: Belize 2012! 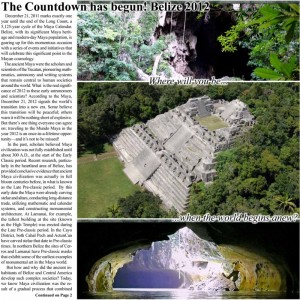 December 21, 2011 marked exactly one year until the end of the Long Count, a 5,125-year cycle of the Maya Calendar. Belize, with its significant Maya heritage and modern-day Maya population, is gearing up for this momentous occasion with a series of events and initiatives that will celebrate this significant point in the Mayan cosmology.
The ancient Maya were the scholars and scientists of the Yucatan, pioneering mathematics, astronomy and writing systems that remain central to human societies around the world. What is the real significance of 2012 to these early astronomers and scientists? According to the Maya, December 21, 2012 signals the world’s transition into a new era. Some believe this transition will be peaceful; others warn it will be nothing short of explosive. But there’s one thing everyone can agree on: traveling to the Mundo Maya in the year 2012 is an once-in-a-lifetime opportunity—and it’s not to be missed!..MORE